Bugs vs. Tanks is bizarre enough to fit alongside The Starship Damrey, Crimson Shroud, Aero Porter and Liberation Maiden, the other games in Level-5′s Guild01 and Guild02 series.

All of the games were created alongside prolific Japanese designers to some pretty mixed results. When it was first released in 2013, Bugs vs. Tanks caught my attention when I saw that it was the creation of Kenji Inafune (Mega Man, Dead Rising, Onimusha).

Although it doesn’t involve any zombies or wacky robots, Bugs vs. Tanks provides a similarly cathartic thrill – blasting armies of ants, bees, and mosquitoes as a shrunk-down WWII German tank. There really isn’t much to it; the Nazi forces assume that the Allies are up to some kind of scheme, which has resulted in their shrunken state.

Regardless, the natural threats surrounding the battalion are an immediately pressing issue. And that’s where you come in. Bugs vs. Tanks has 40 missions of blasting bugs as a tiny tank, Honey I Shrunk the Kids-style.

The game is pretty mindless, to say the least. Each mission involves navigating the maze-like ground-level environments, none of which are particularly impressive as far as visuals are concerned. Usually, you’ll have to take out a bunch of bugs, or attack anthills, or find resources for the battalion, such as cracker crumbs for food and broken-down branches for lumber.

The whole concept is playable, although not actually enjoyable. To a certain degree, I’m glad the game doesn’t overcomplicate itself. It really feels like a throwback to the 32-/64-bit tank games on the PlayStation and Nintendo 64. I’m not sure if that is what the creators were going for, but they totally nailed it on that count.

This game is perfect for picking up and playing, and it keeps you feeling rewarded as you blast through the 40 missions and side-missions. There are hidden tank parts to find, which can be used to customize your tank – another nice addition, which keeps things interesting (and lets you blast mosquitoes with a heart-patterned tank, which is always pretty cool).

Bugs vs. Tanks also boasts 4-player co-op mode, although it doesn’t include Download Play. So if you manage to find multiple friends who have downloaded the game, the option is there. That’s another thumbs up to the developers, but only one thumb up, because Download Play really helps for these crazy niche games.

Unfortunately, Bugs vs. Tanks definitely looks like a throwback to the 32-/64-bit era, from the murky environments to the blocky tank and bug models. Compared to the other Guild01/Guild02 games, it definitely doesn’t hold up, visually. But that’s all right because it is kind of charming all the same. The sound effects are best on mute, to say the least. Again, the old-school feeling doesn’t do any favors here.

The only other complaint I can really think of is the control scheme. It would have made a lot more sense for the left and right triggers to turn the tank turret with one of the face buttons (A/B) to fire and the X button to center the turret. It’s not a major gripe – the default scheme works fine – but it would have made the game a bit easier to play. Also, I’m not sure if it’s compatible with the Circle Pad Pro, but it would make a lot of sense for the game design.

I’m not really sure what intrigued me so much about Bugs vs. Tanks. Perhaps it’s my real-life fear of bugs and the added satisfaction of blasting them to pieces with a tiny virtual tank. Whatever the case, the game is passable, but it hasn’t aged terribly well. Aside from the unusual premise, it’s an otherwise forgettable game.

Recommendation | The price is right for an eShop game, so those who enjoyed tank action games on classic consoles and who still play their 3DS might want to check it out. 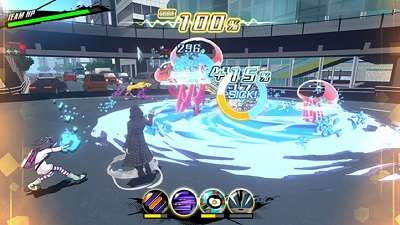 There’s a new NEO: The World Ends With You demo available now