The world’s most beloved simian family returns in another adventure, this time on the Switch (after first appearing on Wii U in 2014). Nintendo continues Donkey Kong Country’s revival with Tropical Freeze, introducing new enemies and reintroducing old favorites. Does this new adventure have what it takes to continue the Kong legacy, or has this banana gone soft?

Nintendo’s attempt at establishing a new golden era for the Donkey Kong Country franchise was met with critical acclaim in 2010 with Donkey Kong Country Returns and sold millions of copies. Four years later and in a new console generation, Nintendo followed up Returns with Tropical Freeze. And now in 2018, they have ported the Wii U version to the Nintendo Switch.

In this new adventure, the Kongs are ejected from their home by an invading navy of Viking penguins that bring an icy winter to the tropical islands. The story sets up Donkey Kong in a quest to reclaim his land. This time around, though, you have more Kong family members coming to your aid. 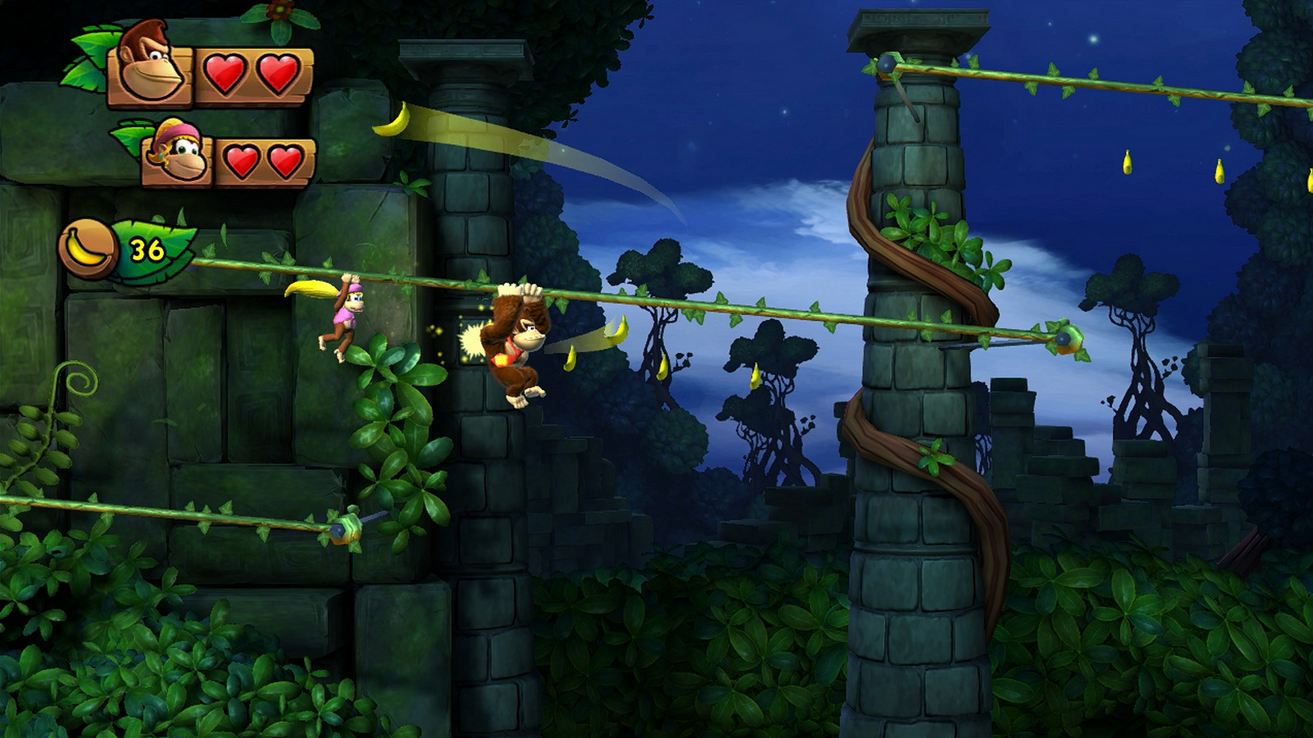 In addition to Donkey Kong, there is also Diddy Kong from the previous Donkey Kong Country games; Dixie Kong, introduced in Donkey Kong Country 2; and Cranky Kong, the original Kong. Each Kong has specific traits and special abilities. As always, Donkey Kong is a big, hulking gorilla that can pound the ground. Diddy Kong is a nimble monkey with a jetpack that propels him farther in jumps. Dixie Kong is a young gorilla who can twirl her hair to propel her jumps higher and slow her descent. Cranky Kong is an elderly gorilla who can bounce on his walking cane like a pogo stick to reach greater heights. The new character additions really make this game feel more like the classic Donkey Kong Country games on the Super Nintendo. I only wish there were more of the mascots from those older games. 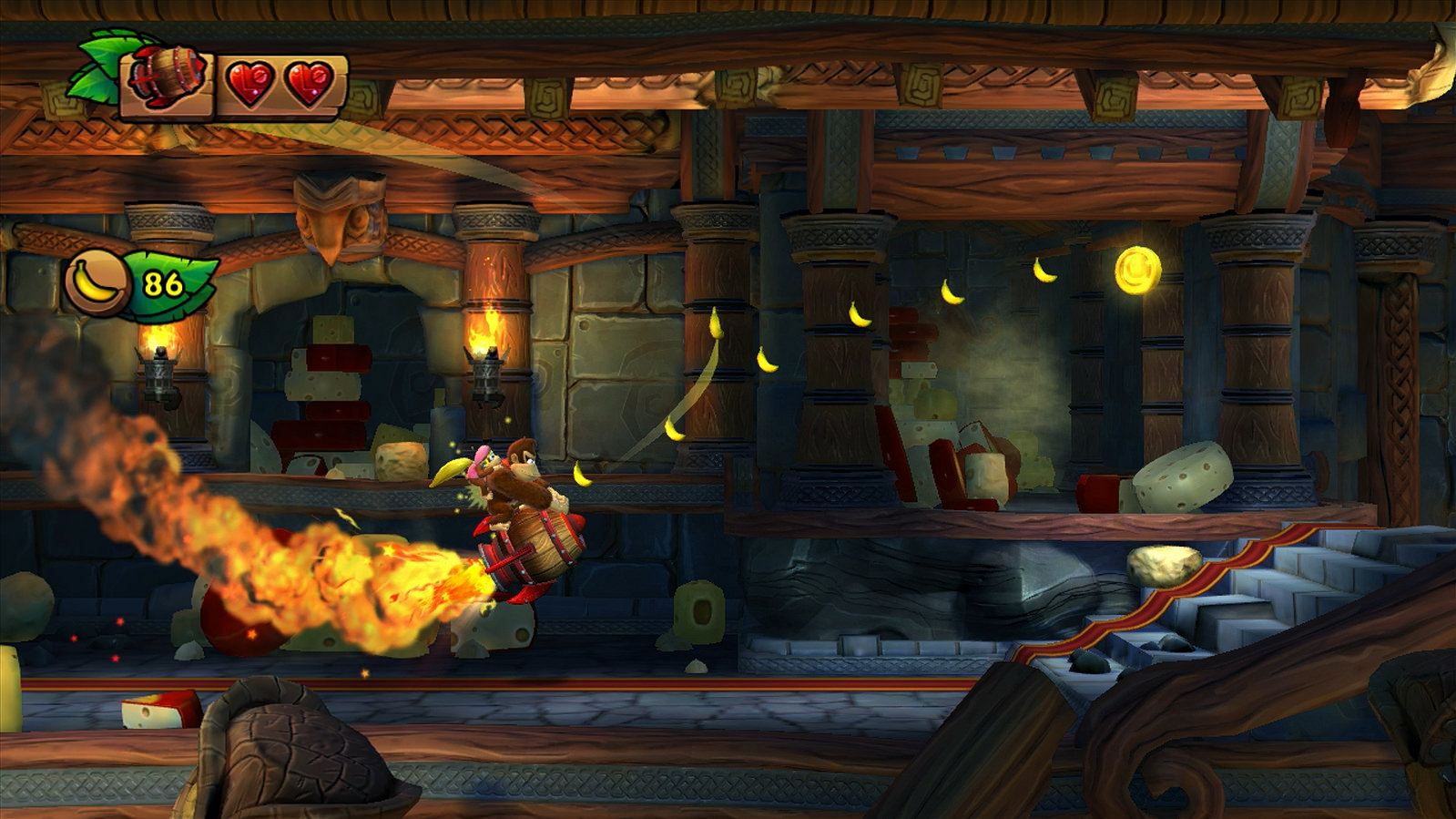 The gameplay in Donkey Kong Country Tropical Freeze has not changed much from Returns in 2010. It’s still very much a precision and timing-based side-scrolling platformer. It can be pretty challenging at times, and mixing up your sidekicks can help you reach otherwise inaccessible portions of a level.

A lot of Donkey Kong gameplay staples return to Tropical Freeze. There are numerous hidden bonus mini-games throughout all of the levels, some much harder to spot than others. You still collect the letters K-O-N-G and puzzle pieces. Rambi the rhino is back as a mountable aid, though other mascots are still absent. Squacks the parrot returns to help you discover those hard-to-find mini-games. Funky Kong returns as the keeper of Funky’s Fly ‘n’ Buy shop where you can exchange banana coins for items like balloons, sidekick barrels, hearts, and even Squacks. 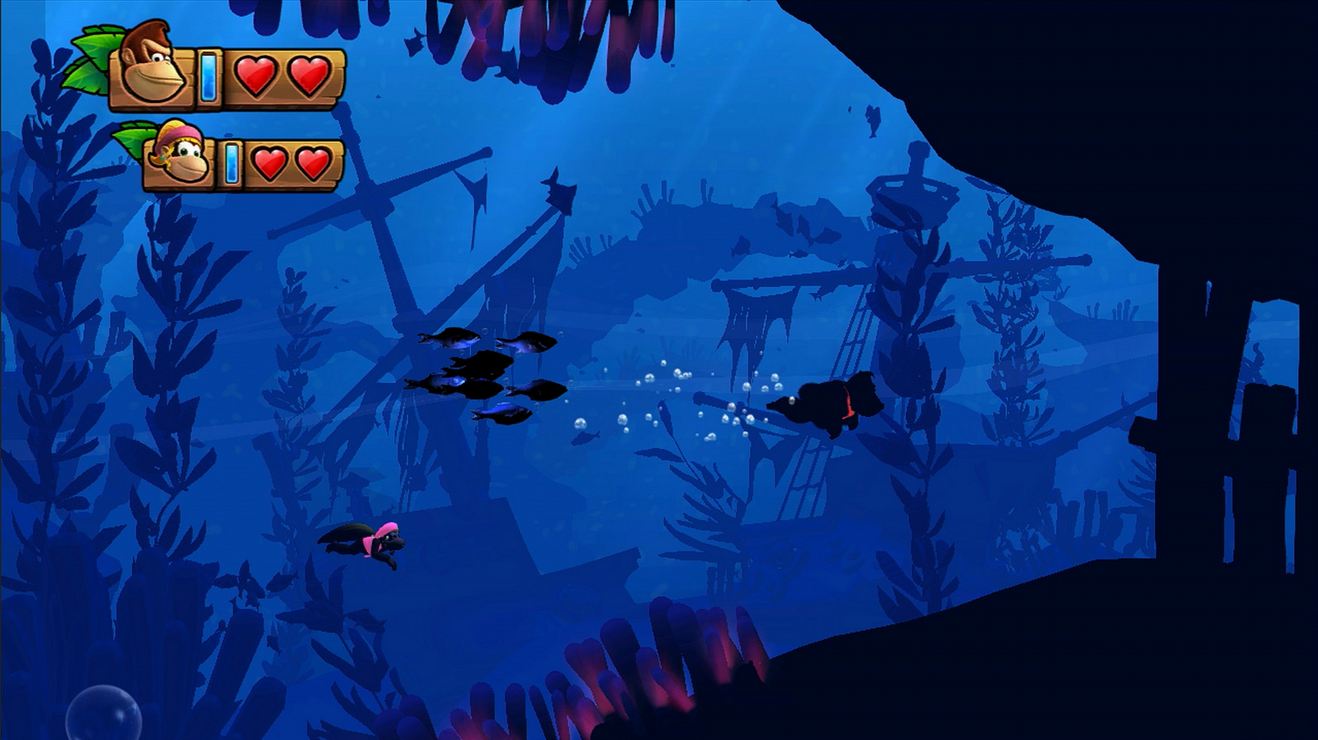 I have few criticisms of Tropical Freeze. If anything, this is a slightly improved version. On the Wii U, the game runs at a native 720p. The Switch version runs at 1080p when docked and 720p in portable mode. The game does appear to run at 60 frames per second, so the action is always buttery smooth.

And in terms of any missing features from the Wii U’s gamepad, Switch owners needn’t worry. That’s not a problem at all. The gamepad screen wasn’t utilized in any special way, which is fine since you wouldn’t want to glance down at a second screen at any time during a Donkey Kong Country game anyway.

One bit of unfortunate design from the Wii U that Switch owners won’t have to worry about is the number of prompts you must go through to start your game upon initially loading up Tropical Freeze. First you must select whether you are viewing on the gamepad or on a TV screen, then you select the number of players, then you select your controller input type (gamepad, Wiimote, etc.), then you confirm the number of players, and then you get a screen prompt reminding you of the controls. All of this leads to a loading screen that can feel like a bit of a drag. On the Switch, the loading times are greatly reduced. 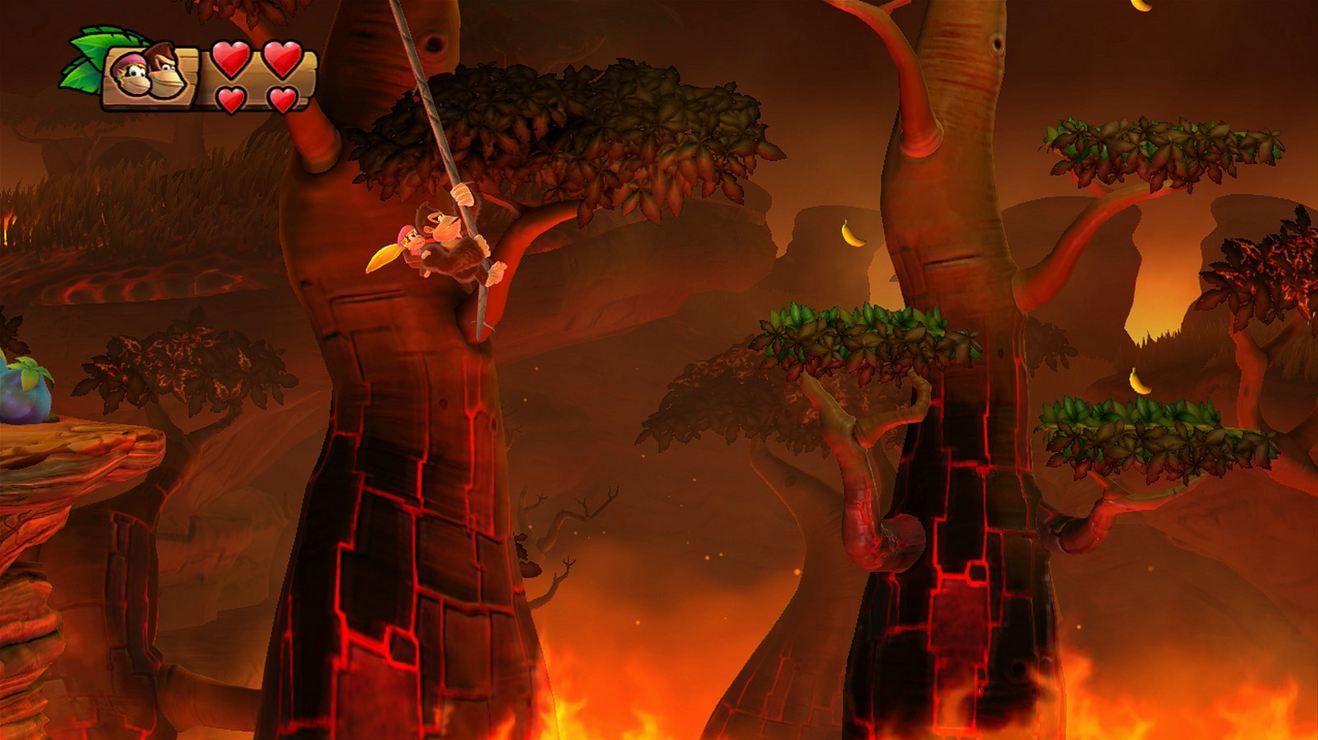 Another gripe that I had from the Wii U version was the control scheme. On the gamepad, it felt less than optimal. Swinging from vines in this game feels like an exercise in finger acrobatics when you’re using the shoulder buttons on the Wii U gamepad. I think the gamepad is just too damn big for this game, but despite my gripes with it, I still traversed most levels fairly smoothly. I may have the opposite criticism with the Switch, at least in portable mode.

Tropical Freeze offers a very creative presentation. The art style is similar to Returns on the Wii but with the full benefit of a crisp, high-definition picture. Tropical Freeze is bright, colorful, and playful. All of the levels are detailed with elaborate backgrounds and dramatic lighting effects. The variety in levels feels greater, and they now include underwater adventures, like in the classics. Many levels transition from vine swinging to tree hopping and then to underwater diving effortlessly and naturally. This is how a sequel is done.

Tropical Freeze is one of the stronger titles on the Wii U and a good candidate for a port to Nintendo’s console-handheld hybrid, the Switch. It feels more like a Donkey Kong Country game from the SNES than Returns did. It’s more creative and more fun.

Recommendation | Tropical Freeze is a good addition to your Switch library if you haven't already played it on the Wii U.