Intellivision is present at this year’s E3. Today, they discussed their upcoming Amico console in further detail. Expect a family-friendly system that combines new and reimagined retro games.

Tommy Tallarico, CEO of Intellivision, was the presenter at E3 today. After being shown for the first time at E3 2009 and having its release delayed due to the pandemic last year, the Amico was demonstrated for the second time at this year’s E3. We already covered a bit of the Intellivision Amico. Still, there’s a lot of new info about their new console.

Although we are in a period of videogames when the best graphics and processing power are sought after, Intellivision’s CEO was clear on this topic from the start of the presentation.

Tallarico told the audience during the presentation that they were not looking for the best processor or graphics with the Amico, but rather a high level of quality in the console’s hardware and a well-curated library of games.

The Amico is a console geared for the entire family; everything about it, from the catalog to the hardware, suggests that it was designed to be simple to use for everyone in the home, from the youngest five or six-year-olds to their grandparents in their 70s. The Amico aims to bring the entire family together in the living room through an easy-to-use interface and intuitive controls.

The games are also an essential aspect of this family-friendly philosophy. They are designed with fun and simplicity in mind so that anybody who picks up an Amico controller may immediately integrate into the gaming experience without needing to watch any tutorials.

Intellivision has been listening to gamers for three years to figure out what they truly want. After much study and visits to Reddit, they have decided that their next console games would contain no in-game advertising, in-app purchases, loot boxes, or paid downloadable content.

The game’s bonus material will be unlocked simply by playing and completing both objectives and challenging tests. Tallarico also stated that the Amico would include an online leaderboard system.

This approach will allow high-scoring players to compare their results to those of other players across the world. Players who rank first in each game at the end of the month will be rewarded a one-of-a-kind and special certificate. The certificate will be delivered to them as a “thank you” for being the greatest player of the month in a specific game.

Although Intellivision’s new console does not aim to be the best in terms of graphics and processing, they will include modern developed games and remastered classic games that have been updated for today’s graphics and gameplay.

Retro Reimagined will be in charge of bringing games back to life from both the original Intellivision and Atari. They will be remastered for the enjoyment of both the general public and fans who played the originals long ago.

Some of the Intellivision titles that will be brought back to life include Cloudy Mountain and Night Stalker.

In addition, the system will have 12 vintage Atari games. Break Out, Asteroids, Tempest, Missile Command, and Burger Time are just a few of the classics that will be available on the Intellivision Amico.

Following the family-friendly ideal, entertainment titles for children aged seven and under are in the works. Collaborations with Sesame Street and the Care Bears will be featured on Amico. Amico will also have party games, board games, and table games that have been modified for everyone to play at home.

The CEO of Intellivision stated that two other large firms and brands that would be collaborating on game development are Mattel’s Hot Wheels and the Harlem Globetrotters. This is particularly fitting since Mattell was the original creator of Intellivision.

The console will also have the completely new Earthworm Jim 4 that is created by the original development team.

The Intellivision Amico launches on October 10, 2021. Pre-orders are open at GameStop. 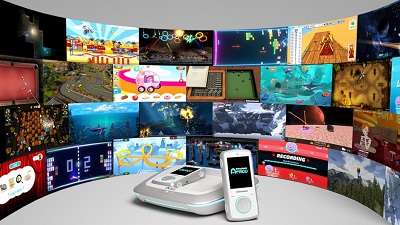