It might come as a surprise that Mario’s last golf outing was a decade ago (Mario Golf: Toadstool Tour for the GameCube). Aside from numerous adventures to rescue Princess Peach from Bowser, Mario spent a lot of his downtime over the last ten years playing baseball, soccer, tennis, basketball, and a variety of Olympic sporting events. For the most part, Camelot plays it safe and takes few risks. Not to overuse the golf puns, but World Tour strives to maintain par, meeting basically all of the reasonable expectations for a Mario Golf title: a large selection of popular Nintendo characters, more than half a dozen different courses, a few unique game modes to spice up golf’s traditional rules, and so on. It looks gorgeous, with colorful and vibrant courses that the system’s 3D effects greatly enrich. The music is also very fitting and pleasant, rounding out the ambiance of the calming but quirky Mario Golf experience. 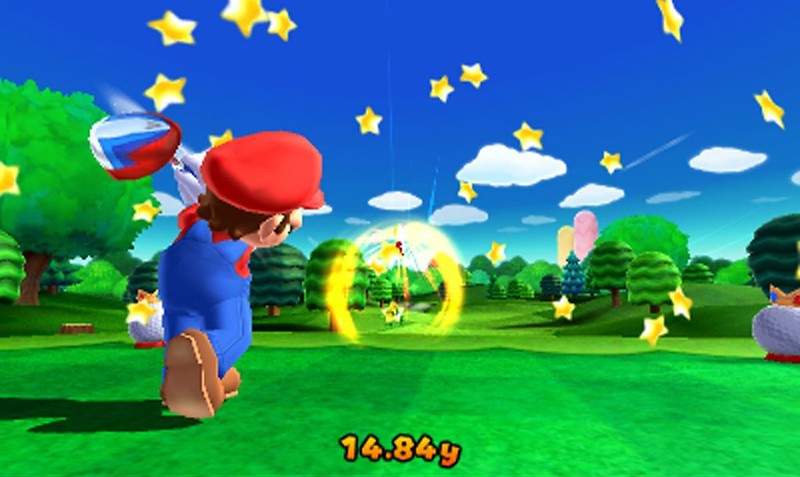 Unfortunately, just like Mario Tennis Open before it, World Tour also does very little to stand out. Although it rarely whiffs, it definitely misses some opportunities. Like almost every Mario sports title, the gameplay is generally identical to previous installments. Basically, anyone that has ever picked up and played Mario Golf in any of its forms should quickly understand the basic three-point swing mechanics, as well as the simple ball control and spin mechanics. Re-familiarizing with all the aspects of the game is a very painless process. For those who are new to the series, World Tour features an “Auto Mode” that simplifies the shot process, making it easier to hit an accurate shot without mastering the timing. This comes at the cost of preventing you from manually tweaking the spin, curve or loft of your shot. On the plus side, these advanced golfing techniques (among others) can be learned through the intuitive training challenges found within the game’s “Castle Club” mode. 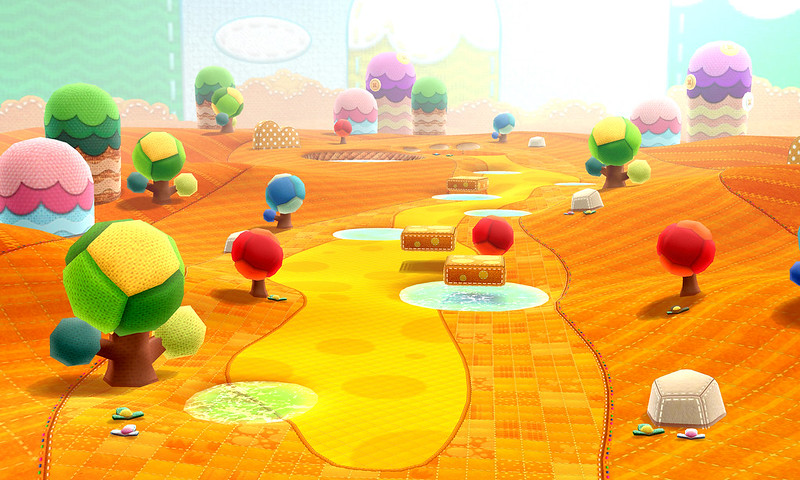 Castle Club is actually where most players will start with World Tour, given that it is essentially the “RPG-lite” single-player career mode that Mario Golf fans have been longing for since the GBA’s Advance Tour. You play exclusively as your Mii character, setting out to become the club champion by winning tournaments on the three basic Forest, Beach and Mountain courses. Throughout the game you earn coins that can be spent in the club shop on dozens of unlocked items: golf clubs, balls, clothing, gear and more. Some of these rewards change the appearance and stats of your Mii golfer, giving you a small degree of customization for your shot trajectory, power, spin and control. 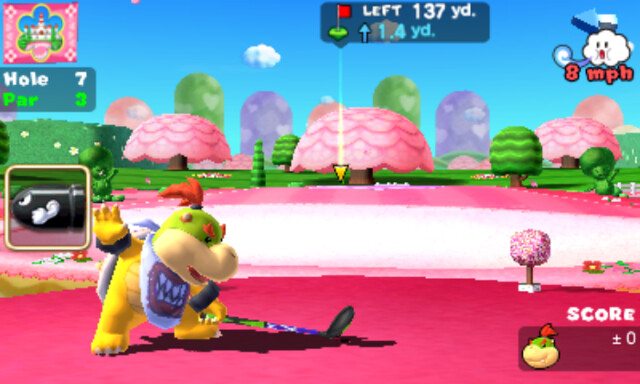 After claiming trophies on the three beginner courses, the highly inventive Mario-themed courses are unlocked. This is where World Tour starts to get interesting. Each of these 9-hole courses provides a challenge that consistently and uniquely tests your golfing skills. For example, Peach Gardens features fairways dotted with flower-powered boost pads, which can be used to launch the ball even further along the ground. Yoshi Lake, based heavily on the Yoshi’s Island series, is littered with shallow puddles of water and floating mushroom platforms that bounce the ball forward.

Wiggler Park is filled with overgrown plants and super-sized versions of classic Mario foes like Goombas and Wigglers. DK Jungle contains the wind-blowing statues and carnivorous plants seen in Donkey Kong Country Returns 3D. Cheep Cheep Lagoon, an underwater course, features several aquatic Super Mario Bros. foes as well as warp pipes and strong currents that alter the trajectory of the ball. Finally, Bowser’s Castle is loaded with lava pits and defended by floating Thwomps and Chain-Chomps posted throughout. Each course not only looks aesthetically unique, but the general design of each hole and the obstacles within them are equally clever and specific to the appropriate theme. 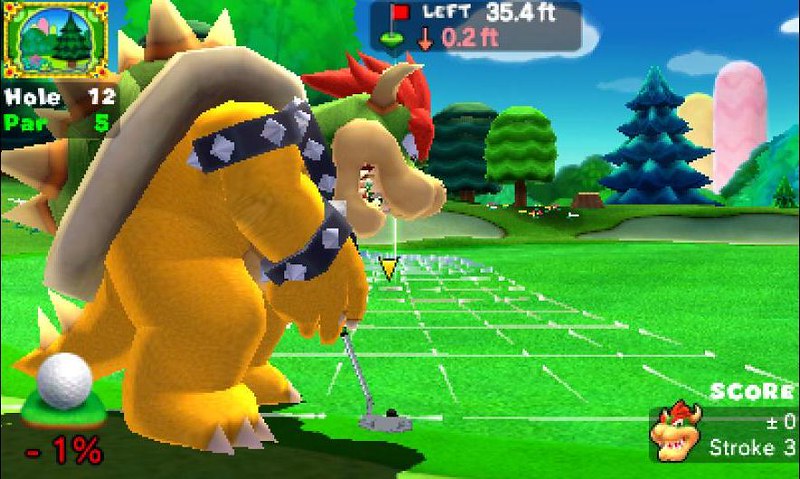 Unfortunately, those looking for longevity from the Castle Club mode will be disappointed. It serves as little more than a superficial stand-in for the deep and addictive career mode from Advance Tour, and lasts only a few hours at most. It does almost nothing to provide the replay value or the rewarding sense of progression that made the GBA version so special. Instead it feels more like a central ‘hub’ for the various training stages and tutorials, the opening courses, and the various online modes. In a sense, it almost feels more disappointing because it is such a half-baked attempt to recreate one of the series’ best features.

Before writing off World Tour entirely, Castle Club should be seen as the tip of the iceberg since the game definitely saves face with its other single-player modes. There is actually quite a surprising amount of replay value and content when you look into these offerings. Aside from the basics (Stroke and Match Play) you can change the rules and spice things up a bit with Coin and Points matches. In the coin mode the goal is simply to collect as many coins scattered throughout the course as possible, while also maintaining the fewest strokes possible. Points matches are based on very basic rules of golf, where the total stroke count is less important than the points earned for performance on each hole: one point for par, two for birdie, one point subtracted for bogies and so on. These various modes serve as great practice for the online tournaments as well as setting your own personal best scores on each course. 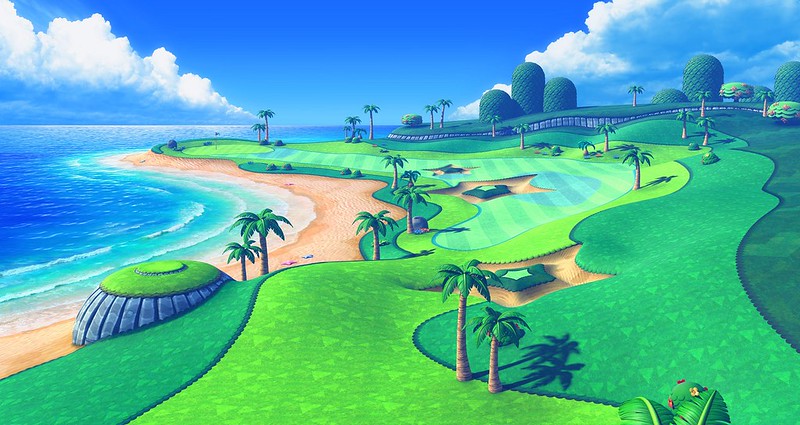 Rounding out the additional single-player content is the Challenges mode, arguably the best single-player portion of World Tour. There are 90 different challenges – 10 for each course – each designed to test your skills and force you to play the game in unconventional ways. For example, Star Coin challenges force you to save par while also going out of the way to collect a Star Coin, which can usually be found floating dangerously close to the edge of the course, or behind a difficult obstacle. There are Ring challenges that require you to shoot the ball through multiple gold rings while saving par. Some require a difficult angle to shoot through; others hover over the ground and demand pinpoint accuracy and placement. Another fun game is Speed Golf, which strictly limits your time and forces you to think quickly about your next shot. The best part of Challenge Mode is that the first 90 Star Coins are pretty tough to earn, but upon completing these stages, 90 more brutally-difficult “Moon Coin” stages are unlocked, literally doubling the size of Challenge mode and the replay value it contains. 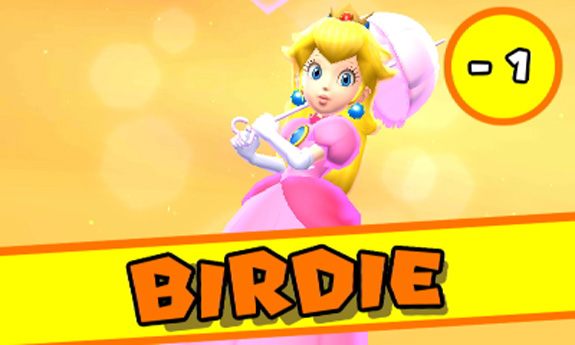 Moving onto the online multiplayer component, World Tour reintroduces many of the same large-scale tournaments, communities and game modes seen in Mario Tennis Open and even Mario Kart 7. Jumping online and participating in one of the various scheduled tournaments is very quick and simple. At the time of writing this review, the rotation of online tournaments with different rules was impressively consistent. As you play through the online tournaments, you will see “ghosts” of other players; this along with the trophy presentations and coin prizes for participation provide a nice sense of community. You can re-play online tournaments as many times as you like for the duration of the competition, uploading your best score to try for the best placement.

Perhaps the only shortcoming of the multiplayer features in World Tour is the lack of “Download Play” functionality for single-card local matches. Although Download Play has been used in only a handful of Nintendo 3DS titles, many of them were Nintendo’s first-party offerings, including Mario Kart 7, Mario Tennis Open, and even Luigi’s Mansion: Dark Moon. It might sound like a lot to ask, but why shouldn’t players be able to enjoy the multiplayer features with their 3DS-owning friends without forcing each player to purchase their own cartridge or downloaded copy? 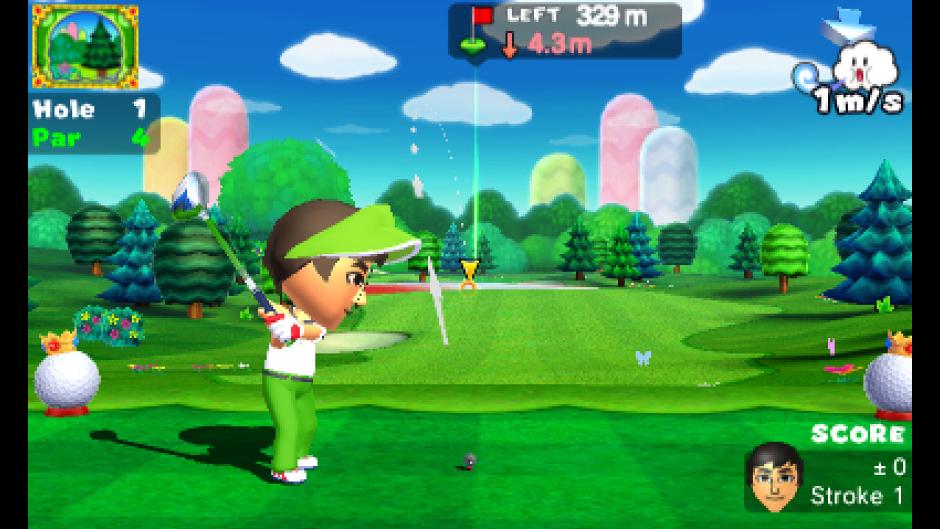 Mario Golf: World Tour certainly packs more content and value than the last Mario-based 3DS sports title, Mario Tennis Open. It also does everything that you would expect from a new installment in the Mario Golf series, bringing the familiar gameplay and colorful visual design along with clever courses and entertaining modes that twist the standard rules of the sport. On the other hand, it nonetheless feels like Camelot was shooting for “par” with this release. Though this isn’t necessarily a flaw by any means, it is hard to shrug the feeling that World Tour was an obligatory installment for the 3DS (read: cash grab) and not so much an inspired return to the dormant Mario Golf franchise.