Mixing the best of 3 acclaimed video games in one but with its own essence.

Stardew Valley has been a benchmark for many indie studios or small developers who venture into creating projects with very little budget but with a very careful art and story. Like titles such as Enter the Gungeon, Soulknight, and Stardew Valley itself, they brought back to popularity the Pixel Art graphic style.

Today, 2 Chilean developers, Cristobal Pizarro and Nicolas Moreno, share with the world that their Kickstarter campaign for their new project, MineGeon: Space Mining Dungeon, has just been published. This incredible bullet-hell open-world RPG, inspired by games like Enter the Gungeon, Stardew Valley Mines and Soul Knight.

MineGeon is a pixel art Shoot’em up, RogueLike game about a citizen who gets a job as a miner and travels to a resources planet named Paimon to aid his family, according to Cristobal and Nicolas on the Kickstarter campaign page.

The player will arrive on the planet knowing nothing and will gradually learn more about the planet through a sequence of events taking place within distinct mines. Each descent will lead to new adventures and perils, with minerals and opponents to guard them.

You may sell all of the resources you’ve gathered and use the proceeds to purchase various items such as weapons, advantages, special skills, and more. While online, you compete with other players and friends to determine who has the most resources on the globe.

MineGeon has a variety of mechanics that make it a one-of-a-kind experience. MineGeons (as the mines in the game are known) are dangerous places, therefore you’ll need to arm yourself from your base and explore them with only what you have in your restricted rucksack. Weapons and Mining Tools are the only two categories of equipment available.

In addition, we will be able to find numerous forms of loot while exploring. Early on in the game, owning property is uncommon. You can own a variety of items, including keys, money, blueprints, and other items.

If we wish to go through the many levels of the mines, we’ll need to discover ladders, much as in Stardew Valley. These may be located beneath minerals, thus there’s a possibility you’ll find staircases in each mineral you mine.

Your personal space base.

You may acquire and enhance different modules on your own base to help you proceed through the game. There are five distinct modules, each with different purposes and improvements based on the corporation that represents them.

Inside our base we will be able to find:

From your base you will be able to do everything, so you will have to improve it little by little to continue advancing in your adventure in this dangerous planet.

“A game that started as a hobby”.

We had the pleasure of talking a little with Cristobal Pizarro about this project that has surprised us in a big way. Seeing how well elaborated the Kickstarter campaign is, we wanted to talk about what is behind the project, influences, and more.

Where does this project come from? When Cristobal Pizarro made the decision to develop MineGeon?

MineGeon is a project that started as a hobby. Being influenced by Stardew Valley, Enter the Gungeon, and Soul Knight, I together with Nicolas Moreno started working on the project almost two years ago.

Since you mention the influence in the game, how did you plan to introduce elements from other games, keeping a unique essence?

Although it may not seem like it, for us it has been very easy. Having a very concise idea of what we wanted to achieve, structuring everything was a piece of cake.

We have seen that in the Roadmap we will soon get a demo of the game.

Well yes, although in the past the project’s discord community could make small tests of the game’s progress, we propose a roadmap where before winter, the backers and the project’s community will be able to test the game in different occasions.

This is a project that has caught our attention. Here at Game Freaks 365 we will keep an eye out for updates on this project, which if it becomes a reality, will become one of the most important indie games in South America. If you want to support the project, be sure to do it by clicking here. 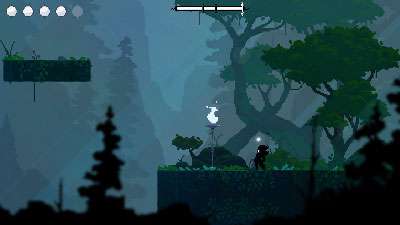