Do you know the most popular Resident Evil bosses? The most terrifying ones? We show you some of them!

In the month of Halloween, it’s always a good idea to revisit those video game franchises focused on giving us a good scare. And if you’ve ever played any of the Resident Evil titles, you’ll know that each of the bosses is created to bring out our hidden fears.

Resident Evil has been around for a long time, and with it comes a lot of bosses. These bosses are some of the most famous in gaming history, but which ones are the most popular? Let’s count down five of our favorite terrifying bosses from this amazing franchise.

The first time you see him, Albert Wesker is an Umbrella Corporation scientist who appears to be helping Chris Redfield and Jill Valentine. But once the pair discovers his true nature as a double agent working for Umbrella, he becomes their greatest enemy.

Wesker is a superhuman who can regenerate his body at will and is armed with superhuman speed and strength. He’s also one of the most powerful weapons in the Resident Evil universe: his super strength makes him able to lift cars or people like they’re nothing more than paperweights, while his regenerative powers allow him to survive multiple bullet wounds—and even head trauma—that would kill any normal human being!

In addition to being one of the most popular bosses in Resident Evil history (and often considered one of its best), Albert Wesker has appeared as both an antagonist and protagonist in many games within the series; he was both the main villain and supporting character in two installments of Resident Evil 5 (2009), then returned as an antagonist again in 2011’s Resident Evil 6 (2012).

Nemesis is notorious in the Resident Evil series. He’s considered to be one of the most iconic villains in gaming, and the antagonist of Resident Evil 3: Nemesis.

Nemesis was created by Umbrella Corporation as a Tyrant, a prototype B.O.W. designed to kill humans with his bare hands and teeth, but he was later modified by Albert Wesker into having rocket launchers attached to his shoulders to speed up development time and increase efficiency during live combat tests against human targets.

After being released into Raccoon City by Dr. Spence, who wanted him to bring about his plan for world domination, Nemesis destroyed an entire city block before going after Jill Valentine. She managed to defeat him using an experimental laser cannon, but then he returned when she least expected it, killing her partner Brad Vickers.

Alcina Dimitrescu is a boss in Resident Evil Village. Commonly known as Lady Dimitrescu, she is feared for her feudal-like rule over the peasantry near Castle Dimitrescu amid accusations of murder.

In my opinion, Lady Dimitrescu is one of the best boss fights in a Resident Evil game. So if you’re looking for an epic battle against a new nemesis then Lady Dimitrescu will give it to you!

You’d be forgiven if you thought El Gigante was the name of a Mexican lucha libre wrestler. In fact, this gigantic golem-like monster is one of the first bosses in Resident Evil 4. He can be defeated by shooting him in the head with your handgun or shotgun and then attacking the parasite on his back.

Are you looking forward to the RE4 Remake? Here are five ways Capcom can improve Resident Evil 4 Remake.

Jack Baker is one of the main antagonists in Resident Evil 7: Biohazard. This crazy boss is a cannibalistic serial killer who appears to be some kind of family man, although it’s unclear whether he’s related to anyone or not. He wields a chainsaw and has no problem using it on people, so you’d better watch out!

A Tyrant, otherwise known as a T-103, is a bioweapon created by the Umbrella Corporation. In the Resident Evil series, they are extremely strong and can regenerate after being shot or blown up. The first Tyrant was created by Alexia Ashford out of her DNA; since then, there have been many different types of Tyrants with new capabilities.

Yawn is one of these new types of Tyrants. He was born from human DNA that was injected into an embryo and later became a hybrid monster through genetic enhancement and mutation. Yawn is the first boss in Resident Evil HD Remaster.

If you’re looking for a boss to fight, we’ve got you covered. From Albert Wesker going through Nemesis to Lady Dimitrescu, these are our top picks as the most popular and terrifying bosses from the Resident Evil franchise!

Which of the most popular Resident Evil bosses is your favorite? Let us know on the forums! 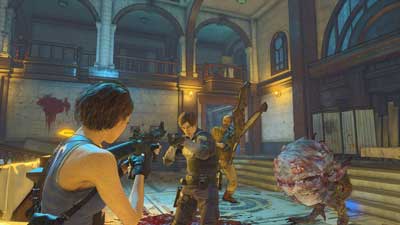