Nintendo has numerous notable franchises: Mario, Metroid, Star Fox and Zelda (to name just a few). However, Donkey Kong was the first real hit that the company ever had in the video game industry. This arcade classic created the platform genre, leading the way for games like Super Mario Bros. 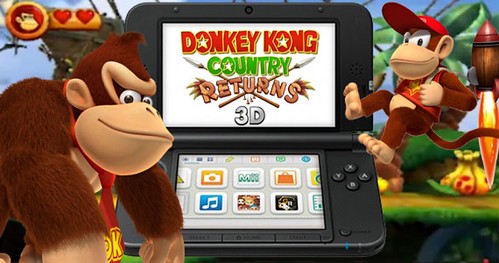 Donkey Kong’s first major starring role on a Nintendo console, Donkey Kong Country, was a classic SNES title. However, for the longest time, Donkey Kong was a neglected franchise. Aside from a 3D role in Donkey Kong 64, the character was relegated to cameo appearances in Mario Kart and other party games. Untraditional games using a drum peripheral were his lone solo appearance on the GameCube.

It wasn’t until the Wii that the series was rebooted. Donkey Kong Country Returns brought the series back to its roots as a side-scrolling platformer with a focus on unforgiving gameplay, collectables and unique boss fights. It was an evolution that worked well — combining pretty 3D backgrounds with the gameplay that gamers have come to expect from the Donkey Kong Country name. 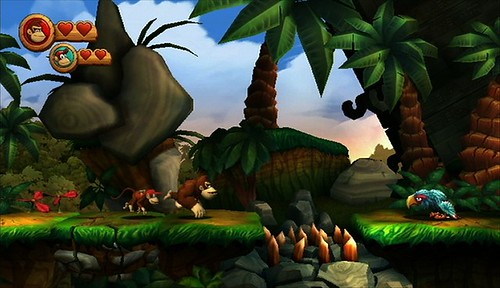 Donkey Kong Country Returns 3D is unfortunately not a sequel to Donkey Kong Country Returns but a port of the Wii game for the Nintendo 3DS handheld. I cannot describe how disappointed I was when I realized that this was actually just a port of a game I had already beaten just three short years ago. Nonetheless, it captures most of the console version’s excitement on a smaller screen.

If you are not familiar with Donkey Kong Country Returns, the game takes place over a series of themed worlds such as a jungle and a beach. You unlock them by progressing along a grid of levels that need to be unlocked through sequential play. It’s basically the same concept as the original series or the New Super Mario Bros. franchise on the Wii. 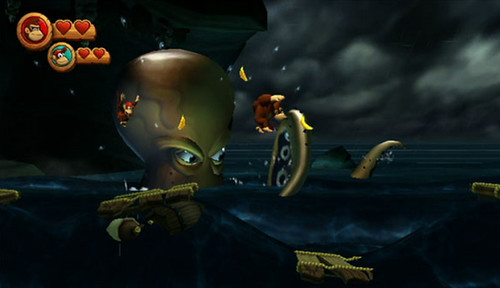 The game’s platforming gameplay focuses on basic running, jumping, climbing and exploring hidden areas. You jump on an enemy’s head to kill them, although some may be on fire and will first need to have the flames blown out. A series of KONG letters, puzzle pieces, bananas and coins are scattered throughout each level to be found. The ultimate goal, of course, is simply to reach the end of the level.

Each world is capped off with its own unique boss fight. While challenging, they are probably the highlight of the game. You will need to think outside of the box in order to defeat them. It can get frustrating at times but you will feel a sense of accomplishment when you finally get past certain levels and bosses. 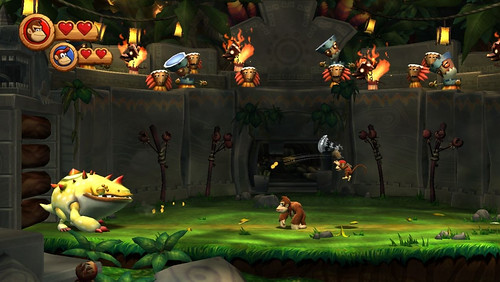 Nintendo has attempted to compensate for the lack of new content with eight additional levels, as well as a “new mode” that offers power-ups such a balloon to save Donkey Kong from dying and lives that can be purchased using collected coins. There are also co-op and time trials modes.

The graphics are surprisingly quite stunning. The game already looked quite good on the Wii but they tend to pop out on the 3DS screen. The two main problems I had were slowdown and cheap deaths due to the size of the screen (although frankly I found the Wii version frustrating as well).

Which leads to the controls. Speaking of cheap deaths, the controls in Donkey Kong Country Returns are not aided at all by the analog stick. It is incredibly awkward to use along with the face buttons and the right trigger in order to grab. Thankfully they did not try to force touch-screen controls as well. While the d-pad is an option, I have large hands and it feels extremely cramped. Other people that I allowed to play the game had similar complaints.

Don’t get me wrong: Donkey Kong Country Returns 3D is still a fun game. It’s just that there are more flaws with this 3DS port than with the original. The addition of eight levels and a new game mode hardly make up for that fact. If you already played and beat Donkey Kong Country Returns on the Wii, there’s very little reason to buy the 3DS version. However, newcomers to the series or veterans who never got a chance to play the Wii version (and who do not own a Wii) should definitely check it out.

Recommendation | Newcomers to the series or veterans who never got a chance to play DKCR for Wii should check it out.