The Grand Theft Auto series is perhaps the seminal franchise of adult gamers. Sales now exceed 30 million units. Grand Theft Auto V is just the latest in the cultural phenomenon, managing nearly a billion dollars in revenue on its first day alone. Commercial success aside, GTA V has also garnered rave reviews. Some have hailed it the best game of the current generation of consoles. This is a bit of an overstatement but it is indeed a good game. 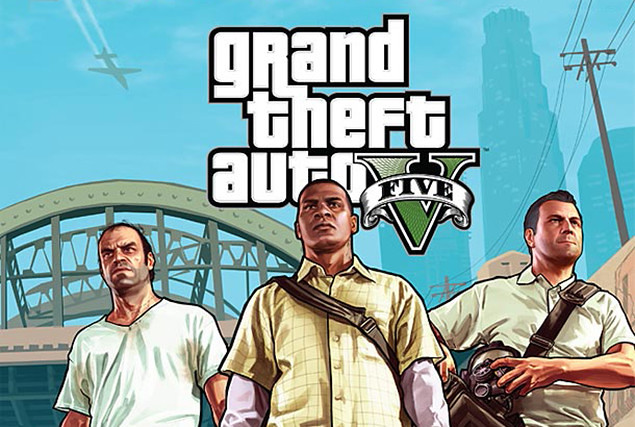 Grand Theft Auto fans will immediately recognize Los Santos, the sprawling Los Angeles-inspired city from GTA: San Andreas. The design of the city is surprisingly accurate on a smaller scale. A number of landmarks can be made out on the ground and in the air: LAX, City Hall, Skid Row, Los Angeles Memorial Coliseum, Venice Beach, Santa Monica Pier, Vinewood and too many others to name. Even the Salton Sea, a desert ghost town, is represented in Los Santos’ distant outskirts.

You start off playing as Michael, a well-to-do former crook on witness protection who is now living in the hills of Los Santos. Eventually you run into some other characters including a stereotypical African-American gangster who drops the n-word more than you can fathom, and a psychotic drug-abusing red neck who is impossible to predict in any situation. However, I just don’t feel a connection to these characters as much as I have in other games. None of them are particularly sympathetic or likable. 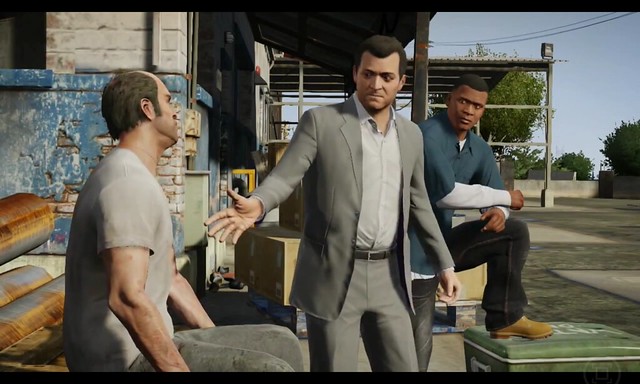 Grand Theft Auto V introduces for the first time a multiple player selection system. You can switch between characters even while you are in the middle of a mission. Sometimes it is required to advance. For instance, one of the characters may get in a physically precarious situation with a gun to their head. In this case you would want to switch to their partner in order to take out the threat. You may also do this during driving segments. The AI takes over the wheel allowing you to get better aim. It works smoothly and changes up gameplay nicely. 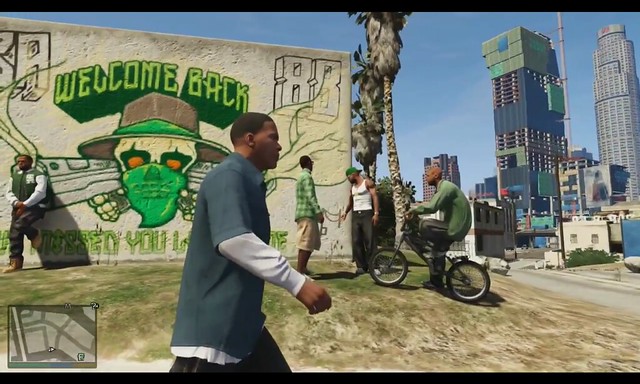 The story is part-time raunchy, racist and violent. Rockstar does its best to make the experience light and comedic. Grand Theft Auto has always been a magnet for controversy. In the early 2000s it was the subject of scrutiny over the option to pick up and kill hookers. A few years later a “hot coffee” mod, which allowed gamers to have sex, brewed parental anger and a re-rating of the game. GTA V has thus far not engendered nearly the same level of public hysteria. Perhaps people are finally accepting that these types of games are here to stay.

That’s not to say that GTA V doesn’t have its moments. One mission has you chasing down a celebrity teeny bopper so that you can record her having sex with a guy that is likely meant to be Justin Bieber. She then hunts you down in her vehicle to try to take the video camera away. These kinds of scenes are equally entertaining and completely inappropriate for children. In case you needed to be warned (it should be self-explanatory with a name like Grand Theft Auto): do NOT let your kids ever play this game. 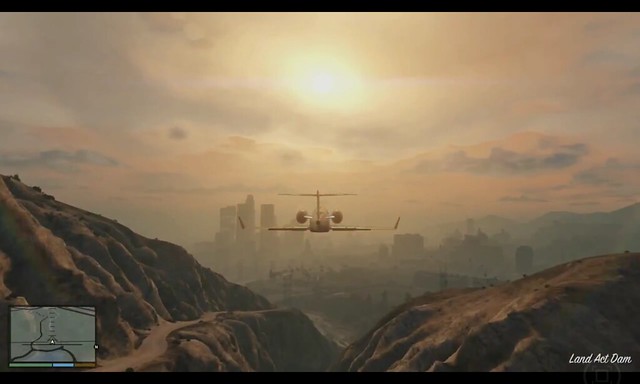 Rockstar lets you choose from a number of different missions to progress along in the story. Some of them are side-missions called “freaks and strangers” that do not have to be completed but add to the backstory of characters. Other times events will randomly appear at certain parts of the map which you can either respond to or ignore. The side-missions are generally entertaining and add a considerable number of hours to your game time.

As far as the core missions are concerned, a select few allow you to choose how you want to go about a mission before it even starts. In the planning stage, you select whether you want to go the “smart” way (i.e. stealthy) or guns blazing. You then need to assign a crew. Higher skilled crewmembers will perform a better service but take a higher cut of the profits. The inverse is true for lower skilled members. 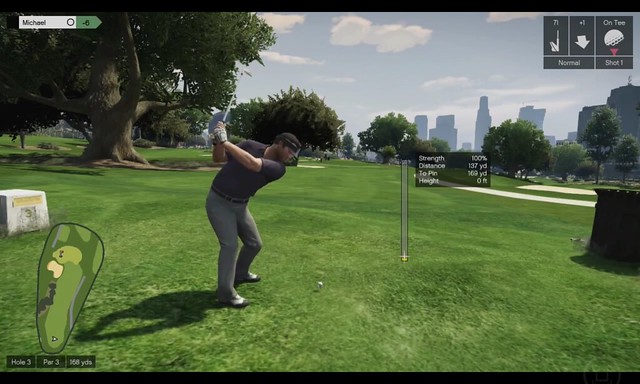 One of the missions I stole a military helicopter from a Los Santos-area base. It was surprisingly easy to do, too. Anyway, the helicopter was used to pick up a mini-submarine (also stolen) in order to acquire some secret military weapons. Pulling off these kinds of heists depends on what level of commitment you want to take in the planning and preparation stages.

Grand Theft Auto V is the first to implement online multi-player. The server issues in GTA V are well-documented so I won’t go into them. Needless to say, they dampened my mood for playing GTA Online. I started with the tutorials, which really don’t seem necessary to me but are forced on you, and couldn’t play with friends until finishing them. You need the cooperation of the other jackasses online to finish the tutorial. 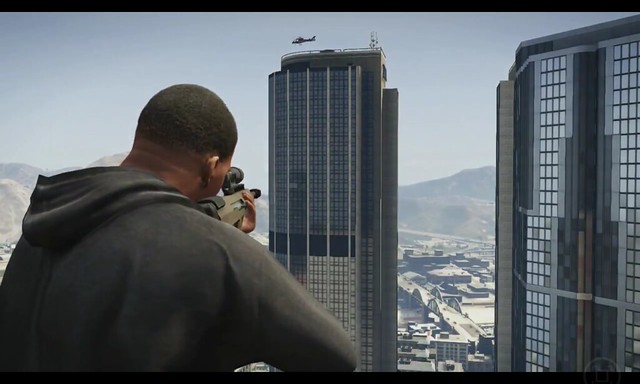 The multi-player does offer a multitude of modes; everything from simple deathmatch to racing and novelty modes such as jets versus bikes. You heard correctly: jets versus bikes. In this mode you play as either a fighter jet pilot or motorcyclist. The biker is attempting to get away to the docks. The pilot’s job is to blow each motorcycle to smithereens. These types of moments make the frustrations of GTA Online worth it.

GTA V is a technically awesome video game. It pushes the PS3 and Xbox 360 to their limits. Los Santos is vibrant, the scale is impressive and the numbers of cars on the freeway make you feel like you are in LA. The only complaints that I have: the game lags at times (although hardly noticeable), there are jagged edges in the textures, and more pop-in of the environment than is acceptable for a late-gen game. 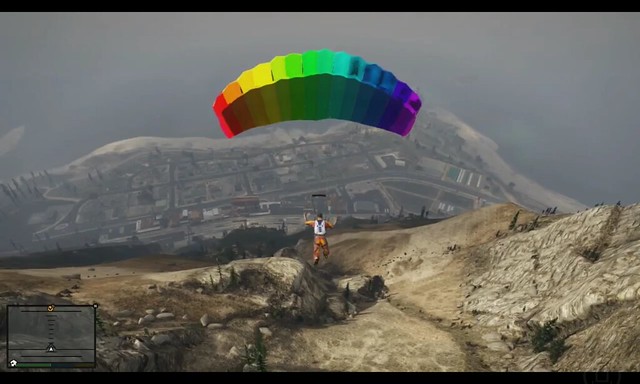 While the game is undoubtedly entertaining, it has its flaws that have unfortunately not been adequately addressed in the gaming media. Server issues have plagued GTA Online; graphically the game suffers from some slowdown, jaggies and pop-in; you spend more time driving around than playing the missions. However, on balance, the pluses greatly outweigh the minuses.

The bottom line is that Grand Theft Auto V will please both long-time fans and past GTA critics alike. A lot of the issues with GTA IV have been ironed out. Police enforcement is not nearly as stringent as it has been in past games. It has a ton of missions, a thriving open-world city environment, online multi-player to keep you company late at night, and Rockstar’s signature cracks at pop culture/politics/society. Best game ever made? Not quite. Best GTA game to date? Definitely.

Recommendation | Grand Theft Auto V will please both long-time fans and past GTA critics alike. Best game ever made? Not quite. Best GTA game to date? Definitely.