Lost Planet 3 suffers from an identity crisis. Sometimes, the game screams Lost Planet with huge boss fights, rolling tundras, fast-paced third-person shooting. The majority of the time, however, it seems like Lost Planet 3 is trying to find itself, and feels more like a Dead Space title.

Lost Planet 3 takes place 50 years before the original during a time when there weren’t a large number of people living on the icy planet of E.D.N III. Instead, the NEVEC Corporation has sent a small number of colonists to the planet to harvest minerals and T-Energy to send back to Earth.

For those who have played the first two games in the series, players will recognize NEVEC as the group in control of E.D.N III. The story of Lost Planet 3 is told by an older Jim Peyton as he recounts his arrival on E.D.N III and the conspiracy centered around NEVEC. 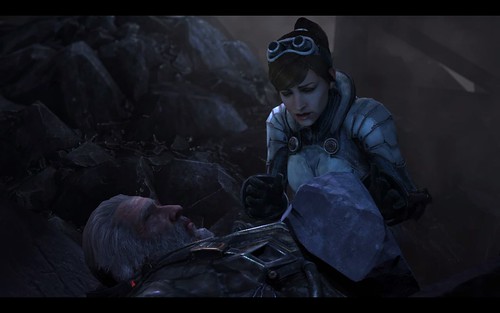 One of Lost Planet’s biggest draws are the fast paced mech fights. Not in Lost Planet 3. Gone are the militarized mechs, gone are the third-person mech battles. Instead Lost Planet 3 replaces the mech weapons with a drill and a grapple arm. I understand why they did it; these were the first people on this planet. They were sent there to harvest minerals and T-Energy, but it really takes away from what makes Lost Planet’s mech battles special.

The third person view while in a mech has also been replaced by a first person view. The first person view was troublesome when Jim was being swarmed by enemies in his non-combat mech. Obviously there was a way to fight them, but when you are surrounded getting bombarded by ranged Akrid attacks, it became very difficult to figure out where attacks were coming from. 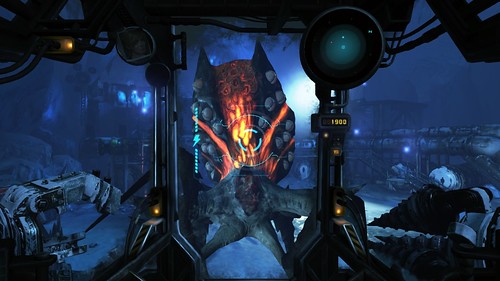 The ground-based third-person shooting is less cumbersome than the mech battles, but still fairly clumsy. Shots landed consistently but Jim would always find a way to hop into cover behind an object I wasn’t trying to duck behind. Sprinting was also a little hard to control. 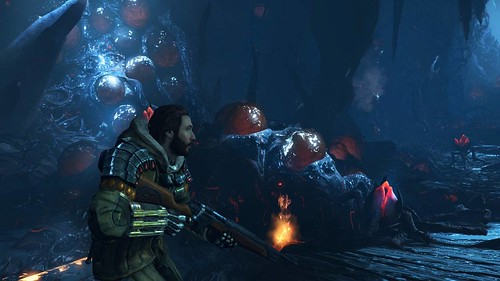 The times when Lost Planet 3 really screams Lost Planet are when the mech combat and the on-foot combat work in tandem. For example, one of the late game bosses forces you to fight with a giant crab Akrid. During the fight, Peyton grabs one of the claws and latches it in place. Upon completing that, players have Jim jump out of the rig and do battle with it from the ground. Moments like this are what make Lost Planet 3 stand out. Unfortunately there were not nearly enough of them. 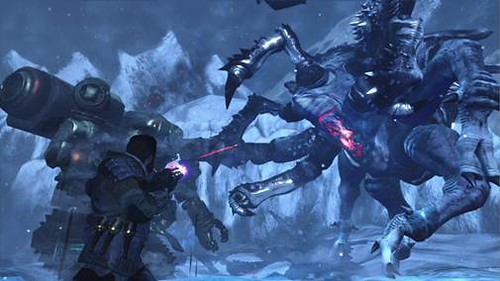 The world of E.D.N III is a beautifully dangerous place. Swarms of Akrid crunch through the snow after our protagonist. Dangerous storms constantly ravage the land. One mission relatively early into the game has our everyman hero trudging through the icy landscape in his rig when one of the storms hits. All of a sudden the landscape becomes dark, the winds stir up snow and visibility is at a minimum.

Jim is forced to jump out of his mech and do battle with the panther-like Akrid. A drum beat starts up, music straight out of a movie where the hunter becomes the hunted. This was the exact situation I was in, the panther Akrid would charge at me out of the darkness and leave only one of their weak spots exposed. The entire time I was doing battle I was tasked with shooting the ice off of my flash frozen rig. 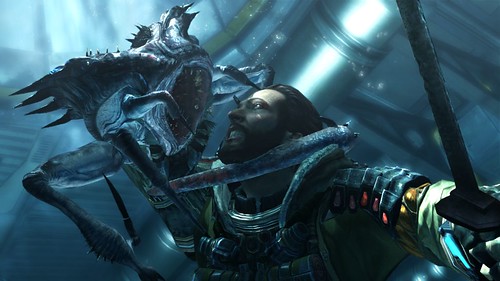 Intense fights like this one really set the tone for a handful of the fights. One of my friends, a Lost Planet fan, called me while I was engaged in this battle. I paused the game and literally waited for him to get to my house so he could check out the fight.

The acting is the best aspect of Lost Planet 3. Since Jim left his family at home, the emotions conveyed through his character are top notch. Not only Jim’s character but most of the characters you meet throughout the ten hour journey through Lost Planet are played very well. Expressions are great during the CGI cutscenes but when the cutscenes are generated in-game the animations get a little clumsy. More often than not when I entered a new area textures took a little while to pop in, which I don’t see too often anymore in late-gen games. 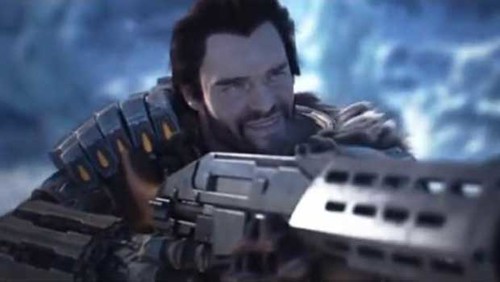 Lost Planet 3 tries to give the player something to do other than the story but these side missions generally don’t give the player more to do than the traditional “go here, grab this” quest. I started doing some of these but they all stayed generally the same. I just kept repeating them so I stopped doing those. I stopped caring because the game wanted me to return to areas I had already been to in the effort of collecting T-Energy. Late game these quests got a little bit better because the game offers a fast travel system. Even with the fast travel the side quests were so boring I still didn’t care to do them. 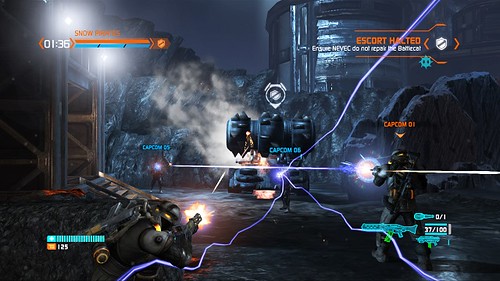 There is also a multiplayer component to Lost Planet 3 that was pretty good, if slightly generic. The shooting and cover problems from the campaign remain intact in the multiplayer but Lost Planet 3 does try to mix it up. Each game mode does something a little different. There is a capture the flag type mode that tasks you with killing a giant Akrid in the beginning of the match. Once both (or either) team has defeated it, players have to bring different parts of it back to their base. Akrid Survival mode has waves of Akrid assaulting a base, and players must fight them until the match turns into a king of the hill game and teams do battle for a singular point on the map.

Recommendation | Lost Planet 3's multiplayer is pretty interesting...trudging through the solo campaign on E.D.N. III? Not so much.