Rockstar Games and I do not have a good history together. I am not a fan of sandbox games (a couple of exceptions do exist; for example, Sucker Punch’s inFamous and Radical Entertainment’s Prototype 2). For the most part, I cannot play them. Unfortunately, a large majority of Rockstar’s library includes such sandbox titles; but the developer has nonetheless taken over the Max Payne series from its former team, Remedy.

Frankly, they’ve done an exquisite job, breaking free from what they are typically known for: Max Payne 3 delivers a gripping narrative, pummeling players with an emotional freight train, breaking through all the barriers that Rockstar had confined itself to within the sandbox.

A Dame, a Dork, and a Drunk 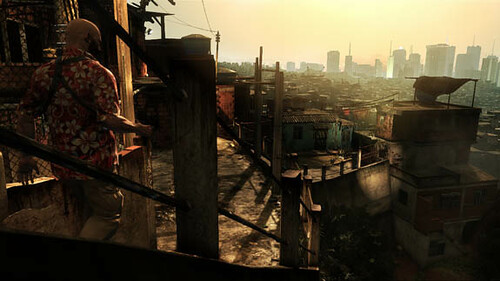 After popping in the first disc and starting up the game, the very first thing I noticed was the amount of style in Max Payne 3; the game simply overflows with it, breaching to the brim, starting with the basic introduction sequence that transitions into the main menu. A short scene plays, immediately giving you a glimpse of the state that Max is currently in; an addict, a drunk, his work taking him away from his haunted past in New Jersey to Sao Paulo, Brazil. As the scene concludes, Max pours himself a drink and walks into his apartment, with the Max Payne 3 logo and main menu fading into view.

The events of Max Payne 3 take place nine years after the second game. The slaughter of Max’s wife and daughter in the previous installments has taken quite a huge toll on our alcoholic ex-cop protagonist; even on the job, Max spends his time drinking and numbing his mind with his other vice, painkillers. The game takes place largely in the present time, with a number of flashbacks scattered throughout to give some detail about how Max ended up at rock bottom. Chronologically, the game starts off in a Hoboken bar; Max has an altercation with the son of a local mob boss – a friend named Raul comes to Max’s aid, but the encounter leaves the young man dead. Raul convinces Max to join him in a private security business, and ends up working one of his biggest protection jobs, looking after the wealthy Branco family. A series of events eventually sets into motion when Rodrigo Branco’s wife, Fabiana, is kidnapped – Max is thrown into a whirlpool of deceit and corruption that would rightfully leave any man second-guessing anyone speaking to him. 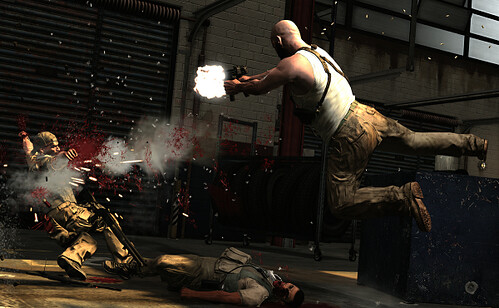 Despite the bright and sunny setting of Brazil, the “noir” style that defined the first two Max Payne games returns. This game is gritty and dark; the city streets have been abandoned in favor of loud nightclubs, depressing favelas, and Brazillian docks. The cutscenes have an interesting effect that splits the screen, with important bits of dialogue flashing on the screen. These graphic novel-style ideas that are expressed in the cinematics help Max Payne 3 reach that “ultra-stylized” feel the developers were going for, and helped to immerse me even more into the story. Without these little extras, the game could have just been another cinematic shooter. Aside from a few instances where I thought the textures could have been smoother, I was mostly impressed with the overall style and the high level of detail contained in the environments and the character models.

A Fat Bald Dude With a Bad Temper 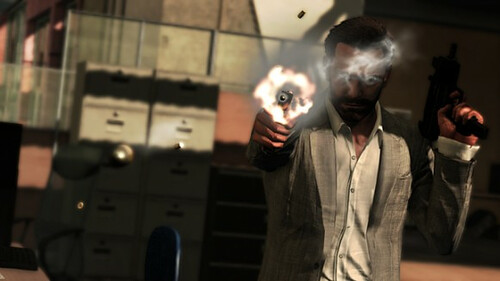 Max Payne 3’s style is not the only thing going for it; more importantly, Rockstar did an incredible job of putting players in Max’s shoes with the gameplay. The controls are tight and the slick combat really brings the whole package together. Max Payne 3 is absolutely brutal, and moving from firefight to firefight, there is plenty of carnage to be had, but it all starts with the solid mechanics.

Bullet-Time has always been the one huge gimmick in the Max Payne series, and having the ability to access it without the loss of even a split-second was genius. Often the intense firefights will put you on the verge of death unless you use the mechanic liberally. Now, a lot of others that I have spoken to have had one major complaint regarding Max Payne 3’s control scheme – the default button mapped to activate Bullet Time (clicking the right trigger). I actually think it’s in the perfect position; clicking the right joystick saves you from having to move a finger to another button, resulting in those precious milliseconds that mean the difference between life and death. Admittedly, there are some control options available – for example, upon starting a new game, players have the choice of “free aim”, “soft lock”, or “hard lock” targeting modes. Free Aim felt difficult to me, but made the game seem more realistic and smooth as well. Soft lock and hard lock automatically “snap” the reticle onto enemies at varying intensities; this makes the game easier, but I also didn’t have as much fun with this turned on.

The actual combat situations in the game are pretty intense; enemies will approach each scenario uniquely, and will even react differently if you die and restart from a previous checkpoint. Your opponents will flank you, throw grenades in an attempt to flush you out, and so on…basically, the A.I. is impressive. When you manage to thin out the groups of enemies, your last bullet fired to kill the final enemy activates a nifty “bullet cam” that follows the path of the shot to its target. Even cooler and more unique to Max Payne 3, you can continue to pull the right trigger and squeeze off extra bullets, pummeling your enemies with lead. Blasting an opponent with the remainder of your clip, even when you’re low on ammo, can be extremely satisfying. Another interesting and unique concept; if Max is holding onto at least one health-recovering Painkiller when he’s shot down, he can enter a “last stand” mode. If you manage to get revenge on the bad guy that shot you down, Max can get back up at the expense of the remaining Painkiller. Sometime’s it’s a good idea to stay on the ground, as Max can rotate and aim with 360 degrees of movement, with detailed animations for bending, stretching, and rolling around to shoot in different directions. The detail is pretty amazing, really. 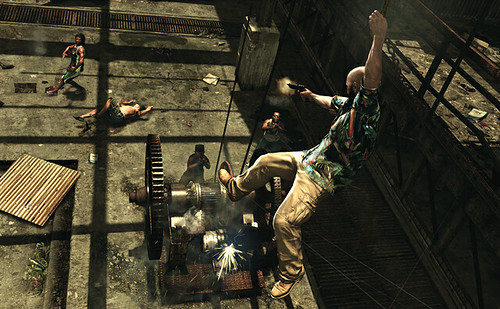 Max Payne 3 also has some of the coolest interactive scripted events I have ever experienced in a video game. My favorite of these takes place in a factory, as Max blasts a gear and grabs a chain, hurtling three stories upward with Bullet Time automatically activated. Max blasts away at the enemies as he’s vaulted upward, and it’s really exciting, to say the least. When I play video games, I tend to restart certain checkpoints if a segment isn’t executed perfectly. However, I’ve never played a game that caused me to restart checkpoints five or six consecutive times just because I thought the portion of the game was so awesome. Max Payne 3 pulls this off, and sets a new standard for third-person shooters in my eyes.

After completing the game there are several extra game modes to tackle. First, Score Attack rewards headshots and bullet time kills with bonus points, but also deducts points for things like getting shot, going into “last stand”, or using Painkillers. New York Minute and New York Minute Hardcore are the most difficult modes in the game; New York Minute gives you a minute on the timer, and rewards you with extra time by pulling off headshots or various violent acts, but you must complete the entire level before the time runs out. If you die at any point, you restart from the beginning of the chapter. New York Minute Hardcore takes the idea further; most of the same rules apply, but dying forces you to begin the entire game over from the beginning. 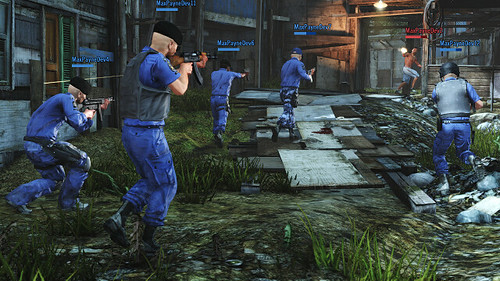 On top of the extra single-player modes, Max Payne 3 features an extensive multiplayer component – a first for the series. Players can fully customize load-outs and character preferences to their liking, with weapon attachments and hundreds of different possible combinations. There are eleven different multiplayer modes in total, some like the standard team deathmatch and its variants, and a few that are unlike anything I’ve played before. For example, “Gang Wars” puts players in the role of a local gang, with each gang occupying a spot on the map. Players must complete objectives such as defending territory and sabotaging rival gangs. “Payne Killer” is another unique game type; one player starts the match as Max, another begins as Raul. Any kills earned by these players results in extra points, but coordinated attempts to kill Max or Raul result in the role being passed from one player to another. Basically, it’s a “VIP-style” game type, where you try to remain the VIP in order to earn more points.

In conclusion, I think Max Payne 3 is the cinematic experience of the summer. Being put into the role of the belligerent, beaten-down detective is a treat. There was a point that the frequent cut-scenes started to become frustrating, but after some thought I realized that this game would not be as rewarding if it wasn’t so absolutely engrossing and aesthetically stylish.

The single-player is insanely well-done, and the multiplayer impresses as well. With the extra game modes and the robust competitive component, I can only say that I wish every $60 game offered half as much high-quality content as Rockstar’s Max Payne 3.

Recommendation | Max Payne 3 delivers a thrilling single-player experience, but its multiplayer component and extra content make for a surprisingly well-rounded action game. One of Rockstar's finest.