The Wii U was loaded with a variety of launch titles: shooters, sports, adventure, RPGs and more. Easily missed can be download-only titles for which there were a few big name titles, including Trine 2 and Nano Assault Neo. While the Nano Assault franchise is synonymous with Nintendo handhelds (the DS and 3DS, specifically), the console version is the best one yet with stunning graphics and arcade-style gameplay. 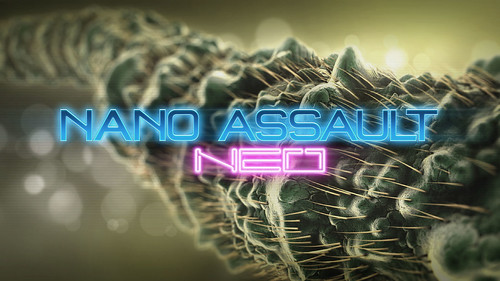 Nano Assault Neo is pretty light in game modes, only featuring a Single and Two Player experience, plus a Missions page. The Missions are just a list of different in-game objectives such as reaching a certain score, completing a cluster without losing a life and so on. An “Arcade Mode” lets you try out a single unlocked level to improve your score.

The Single Player mode is a series of different spherical planet-like levels called clusters. In all, there are sixteen unique clusters with each of the game’s four zones – Epsilon, Zeta, Omicron and Sigma – comprising four separate levels. Three of the four zones are locked and have to be beaten sequentially to unlock new ones. Each zone has one boss fight on the fourth level. 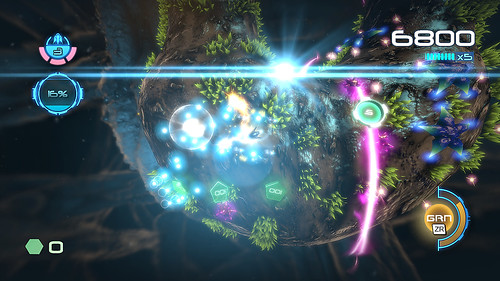 The goal of the game is to kill bacteria and other microscopic life forms on the cell clusters in order to purify it. You do this by moving around using the left analog stick and firing with the right analog stick. You can collect power-ups, “BONUS” letters to unlock a bonus stage, and little point icons to boost your overall score. At the end you can compare your score to those of your friends and every other player in the world. Your score will also earn you points that can be used to purchase things such as extra lives.

While there is not much story involved here, the gameplay itself is surprisingly addicting. Your ship starts with just one gun and as you move around killing things you can get extra guns and special power-ups. As they say, two hands are better than one and the same goes for guns on your ship. The extra guns definitely come in handy when disposing of enemies. 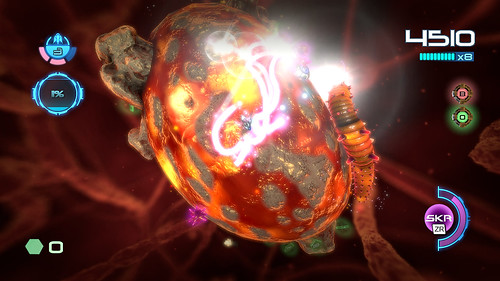 Two Player mode lets a second player join in locally (sorry, no online). You can use a Wii U Pro Controller, the Wii’s Classic Controller Pro or a Wii Remote and Nunchuk. It’s pretty awkward to play with the Wii Remote and Nunchuk combo since they have you control the ship with the analog stick and use the d-pad for firing. The result is only eight directional firing rather than 360-degree firing.

The graphics in Nano Assault Neo are quite amazing for a downloadable launch title. Each cluster has vibrant colors and the environments feel truly alive. There’s a good variety of enemies, too, so you don’t feel like you are fighting the same things over and over again. This game is definitely one of the bright spots of Nintendo’s new HD console in terms of both graphics and presentation.

Recommendation | For a budget price, Nano Assault Neo is a must-have for arcade shooter fans.