Revered video game series Ninja Gaiden suffered media blowback when the third iteration of the modern franchise launched on PS3 and Xbox 360. While I never played the original version, I figured that some of the criticism was probably overstated.

That might be the case to a certain extent. However, Ninja Gaiden 3 was at best a questionable launch choice for Nintendo’s Wii U. If their only goal was to stack the system with M-rated games – of which there are at least three others at launch – then mission accomplished, but the experience is hardly satisfying.

Ryu Hayabusa is back yet again. This time he’s the focus of a terrorist group, which has taken the British Prime Minister into custody. Your mission is to save him. The first mission takes place in the streets and buildings of London, including what appears to be Number 10 Downing Street. At the end of this first level, Ryu is cursed in his right hand, which can later be used as an ability to vanquish foes. 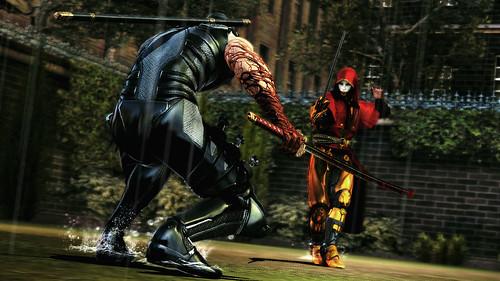 Nonsensical story aside, Ninja Gaiden 3: Razor’s Edge is an enhanced port similar to the Sigma games. All of the downloadable content from the PS3 and Xbox 360 versions have been included, as well as a new playable character. The Wii U GamePad is used to see a combo list, select weapons, and use Ninpo (which are special abilities that need energy to be used).

Ninja Gaiden 3: Razor’s Edge is very much a hack-and-slash game in the mold of past games in the series, sort of a cross between God of War and Samurai Warriors. To be sure, there are some stealth elements and silent takedowns included in the game, but the heavy emphasis is on ridiculous action elements that would make Arnold Schwarzenegger jealous.

Gratuitous violence is a signature of the Ninja Gaiden games and it is in heavy abundance here. Severed limbs, decapitated heads and blood shooting every which direction are just par for the course in Ninja Gaiden 3. Mario might not start shooting hookers, but Ryu certainly has no compunction about his actions in this game on a Nintendo system. Likewise, the language is borderline obnoxious. The f-bomb is dropped incessantly. Be warned: this is not a game to get your kid. 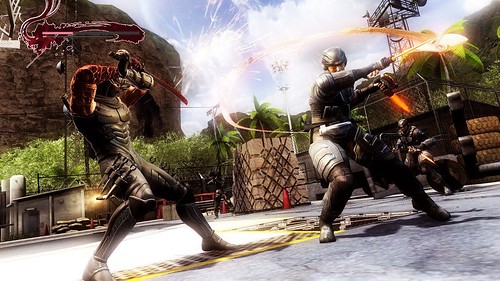 While the action itself is passable, if entirely repetitive with throngs of similar-looking thugs charging at Ryu constantly, the controls leave a lot to be desired. It feels a decade old. The face buttons are used to perform combos and the analog stick to direct where the attack lands. Unfortunately, the commands are sluggish and unresponsive. Warner Bros.’s Batman Arkham series has ten times smoother, uninterrupted action. Ryu gets a few different weapons, including a bow and Wolverine-like claws, but they do little to solve the underlying problems.

The graphics also leave a lot of room for improvement. I remember when Ninja Gaiden first landed on the original Xbox. It was the marker for graphical excellence. This is not the case with Ninja Gaiden 3 with the lifeless, linear environments, and invisible walls. Jagged edges and poor textures are a frequent problem as well. It’s a shame to see a “next-gen” launch title that looks arguably worse than the original game from a couple years prior.

Ninja Gaiden 3: Razor’s Edge is one disappointment stacked atop another. A bad PS3 and Xbox 360 game was ported with modest changes that gloss over the underlying problems with controls, repetitive gameplay, and dated graphics. Game mechanics from the early 2000s aren’t going to cut it. If Team Ninja doesn’t attempt to modernize with their next game then they might as well call it quits.

Recommendation | Ninja Gaiden 3: Razor's Edge is one disappointment stacked atop another. A bad PS3 and Xbox 360 game was ported with modest changes that gloss over the underlying problems with controls, repetitive gameplay and dated graphics.