The third entry in the Pikmin series is finally here. It’s been a decade since the last entry. Nintendo went through the entire last generation without anything but ports of the original two GameCube titles to the Wii. I’m happy to report that it was well worth the wait. 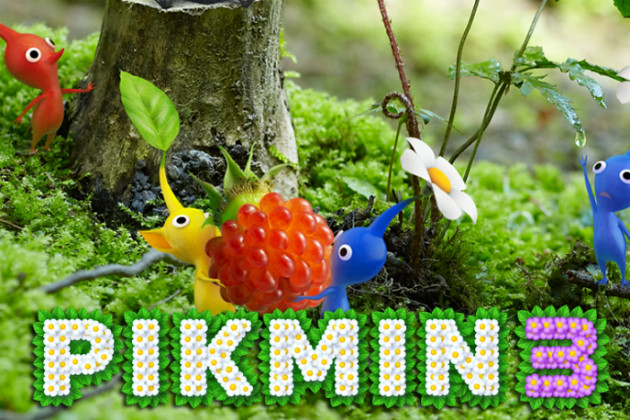 Instead of Captain Olimar there are three new commanders: Alph, Charlie and Brittany. The commanders are in search of fruit on a distant planet. Their home planet has become desolate and the people there are starving since they have a strictly fruit diet. Unfortunately, you crash land on the planet that you were hoping to search for food.

The goal of the game is to find your old crewmates, retrieve missing parts, and collect as much fruit as possible. It’s still pretty similar to the first two but there are a few new twists that distinguish it from the originals. More on that later. 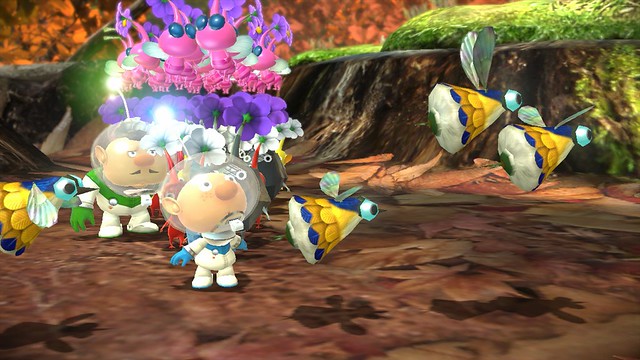 For those unfamiliar with the series, Pikmin is an RTS (real-time strategy). The game is broken up into days. Each day you land on the planet to explore the environment. Eventually when you clear out all of an area — or all of an area that you can with your current Pikmin types and abilities — you will move on to new areas.

There is only a limited amount of time that you can spend on the planet’s surface each day. Time is displayed as a slowly moving sun across the top of the screen. When the sun is about to set it’s time to go for the day. You lift off with your spacecraft to avoid the night creatures that might eat you and your Pikmin. Any Pikmin not in your group when you leave will perish. 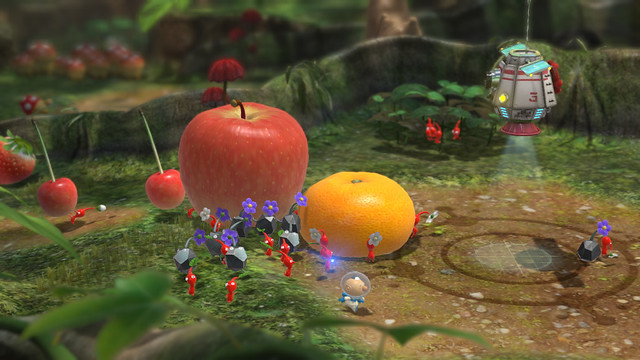 There are five types of Pikmin, including two new ones: black, red, yellow, blue and pink. The black Pikmin look like pebbles. These rock-like Pikmin are good for breaking glass, ice and enemy armor. The red Pikmin are fire resistant. Yellow Pikmin can be thrown at greater heights and are both resistant to electric attacks and can conduct electric currents. Blue Pikmin can enter water without swimming and pink Pikmin can fly. Every Pikmin type can be used to build bridges with pieces of stray tile, knock down walls, attack enemies and carry objects back to your spacecraft.

Pikmin 3 is unique from the other games in that you are no longer just a single commander shepherding Pikmin. This time you have two (and eventually three) commanders that can work together or separately. Since commanders cannot jump, it is possible to throw another command onto a ledge and then throw some Pikmin up there as well for him to lead. Alternatively, you can multi-task and have one group search one area while the other group searches other parts of the map. 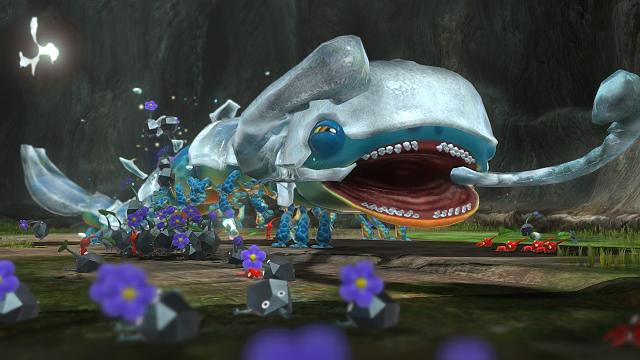 However, you can only have one hundred Pikmin on the field at a time. The way that you distribute them between the commanders is completely up to you, although it can be difficult to do with the controls. The GamePad allows you to separate Pikmin into their different color groups. You can then call specific Pikmin with the right trigger but you will often grab more than you want.

The GamePad controller has a few decent uses. The first is that it acts as a map as is the case with most Wii U games. It’s actually quite useful since you can use the GamePad to look for fruit and objects that might not be readily visible on the television screen. You can also use the GamePad to set a waypoint for one of your crews.

All told, Pikmin 3 is one of the first games for the Wii U that I can confidently say is a “must have” for console owners. People shouldn’t go rushing out to buy a Wii U to play this game but it is a solid foundation for the future of the system. If Nintendo keeps pumping out quality titles like Pikmin 3 they may yet have a fighting chance.

Recommendation | Pikmin 3 is one of the first games for the Wii U that I can confidently say is a "must have" for console owners.