Soul Sacrifice is one of the biggest releases for the PlayStation Vita since the console launched at the beginning of 2012. Made by Mega Man creator Keiji Inafune, Soul Sacrifice is a portable title with the heart of a big budget console release.

Many people have compared it to the likes of Monster Hunter. While the two are similar, Soul Sacrifice manages to stand apart from the crowd with bite-sized missions and an “offering” system (more on that later).

Upon hitting the start button, the game opens with a scene where two bystanders are imprisoned in cages of bones. However, their conversation is short lived when a powerful sorcerer named Magusar appears and executes one of them to gain their power. This is the main premise of Soul Sacrifice. Just before the other bystander is killed, a book named Librom speaks to him from beneath a pile of bones. So begins Soul Sacrifice.

Librom is a collection of stories and battles between sorcerers and monsters. This is how the bystander learns his abilities, living vicariously through these stories. He also serves as the entire menu for the game. Selecting story missions, pacts to kill other monsters, and player information are all stored within Librom’s pages. 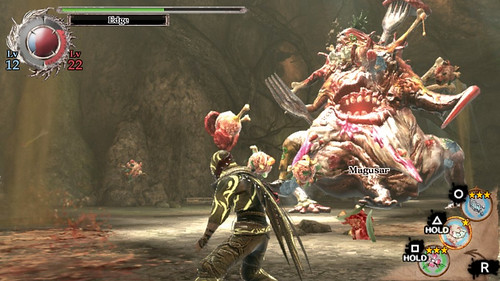 My favorite thing about Soul Sacrifice is the pocket-sized missions. You can literally pick up and play one mission, or if you are feeling particularly adventurous, sit and play for hours at a time. It’s up to the gamer, and it works really well. Obviously sinking more time into the game makes progression move faster, but at no point in the game did I feel obligated to grind for huge amounts of time.

This perfectly leads to one of my favorite features about Librom: the difficulty ratings and story progression. Each mission is ranked on a scale of one to ten (sometimes a five or six ranked mission ended up much harder than another, which was off-putting at times). The nice part is there are so many missions to do that grinding isn’t as much of a necessity. If you can’t beat a level, go to one of the other chapters and power up there. 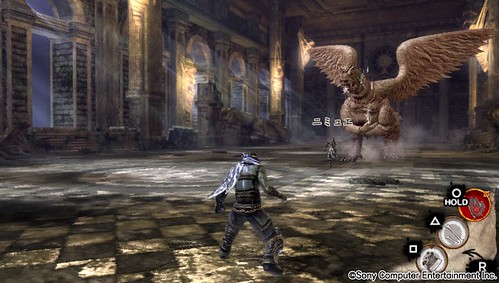 Another option is completing pacts. Pacts are quick levels that pit you against specific monsters in the game. Beating levels reward bonus experience and extra abilities. The game is overflowing with things to do. Not being able to beat a level isn’t game-breaking when there are so many other level choices at your disposal.

Combat works like other similar hack-and-slash titles but with a twist. Throughout the game, defeating enemies and completing missions/pacts gives you new “offerings.” These offerings are your abilities, which have a huge range of powers. Some can summon a gigantic golem to attack your enemies; others transform you into a giant ball of rock that you can spin and guide into your enemies to smash them. While many offerings are offensive in nature, there are also defensive abilities that can provide large shields or heal you and your partners. Similar to Mega Man, almost every monster has a weakness, so switching your offerings to cater to a specific mission is almost mandatory. 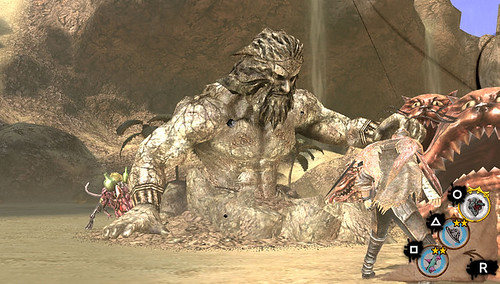 Each offering has a specific amount of time that you can use them. Continually casting isn’t an option. As you reach your cast limit, the game gives you a warning. Within each map are specific points that you can renew your offerings’ cast count. If you end up casting your offering too many times, the ability breaks until you can get into the menu and use the game’s currency to “fix” it.

As you level up, you also earn black rites, which are extremely powerful abilities. These come at a cost. Each black rite has a negative buff to it. Your character keeps the negative buff not just through the rest of the level but each consecutive mission until you pay the price to remove the buff. I found this to be a slight annoyance because in-between levels the game doesn’t remind you to get rid of that negative buff. Oftentimes, I would just start up another level and then when the level started I would get a reminder that I hadn’t gotten rid of the black rite’s toll. This wouldn’t matter so much if the game had slightly quicker load times, but I would end up sitting in menus for minutes at a time. 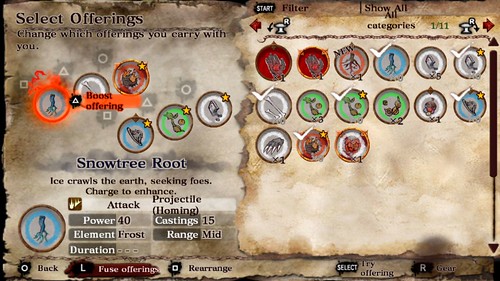 As you defeat enemies, they writhe on the ground for about 30 seconds giving you the option to save or sacrifice them. There are two tiers you can level up: the dark and the light. Sacrificing puts experience in the dark side of the experience bar and saving puts experience in the light side. Leveling up through sacrifice makes abilities and your character more powerful. Leveling up through saving increases your life.

I found myself leveling up each side pretty evenly. Each monster is a mutated version of a real-life animal. I love animals so, to be honest, I found myself choosing whether to save or sacrifice depending on its species. Every time there was a cat, I saved it. The smaller creatures don’t give you a lot of experience compared to the final enemy of the area, so saving most of the smaller animals and sacrificing the main person wasn’t too big of a deal. 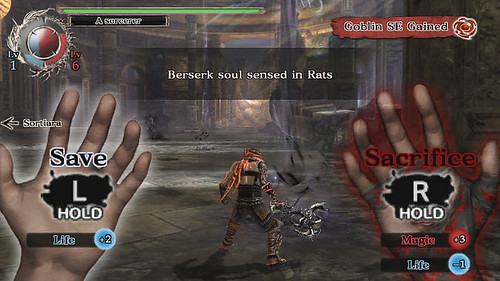 If you don’t feel like playing by yourself, there is also a multiplayer component to the game that has worked well above my expectations for a brand new game. I only experienced one or two disconnects during the 10 or 11 hours I played multiplayer, which is awesome because it has worked far more fluidly than a lot of console releases in the past few years.

After reaching a certain point in the story, you can hop online and play with up to four people. The game doesn’t let you play through story missions with others, but you can play any of the monster pacts online. Some of these pacts are actually extremely difficult by yourself, so playing with others is almost a must. The character customization isn’t the deepest I’ve ever seen in regards to the physical appearance of characters, but there are a handful of different character outfits to pick from with several different colors in each category.

I still have plenty to do in Soul Sacrifice. With the amount of content packed into that small cartridge, I don’t see myself stopping anytime soon. I have a few friends that picked the game up as well, so if they ever want help beating some of the enemies in the pacts, I would have no problem popping the game in to help them out. If you own a Vita and are itching for an RPG with a unique take on the genre, Soul Sacrifice is definitely the game for you.

This review was originally published in June 2013. Drew Meadows now writes for Electric Bento. The review has been updated and proofread with the help of Proofreading Monkey. If you are an author, blogger, or professional writer and need error-free content, check out Proofreading Monkey for their affordable proofreading services.

Recommendation | If you own a Vita and are itching for an RPG with a unique take on the genre, Soul Sacrifice is definitely the game for you.