When you look at how a story is told, many pieces come together to make up the overall presentation. The strength of the story itself and its various plot points and set pieces can certainly engage players and viewers as long as it supports a cast of characters that are memorable, the settings are pleasing and the overarching theme leaves you thinking about it long after you’ve experienced it. 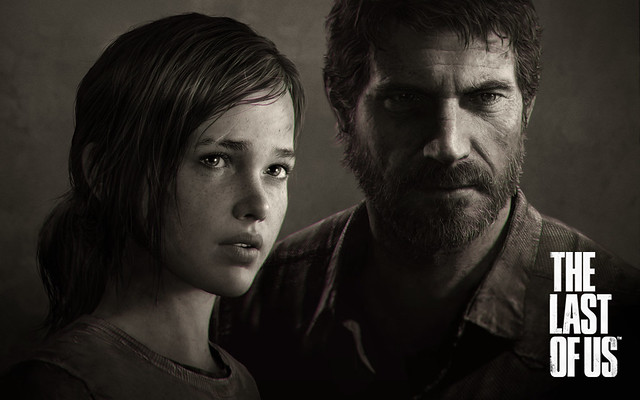 Since the release of Uncharted: Drake’s Fortune back in 2007, it has been apparent that Naughty Dog can tell such a story; one with such an engaging storyline that it made you feel emotionally attached to the characters and the lore of the world that they inhabit. Fast forward to E3 2012 when Naughty Dog announced a new IP and one that would seemingly shatter your very idea of what’s memorable in an experience. Now, Naughty Dog’s newest iteration is out, putting you in control of Joel and Ellie as they venture out on a post-pandemic trek of survival, where the harshest realities come to pass and you quickly come to realize that you are among a few sane in a world gone mad. 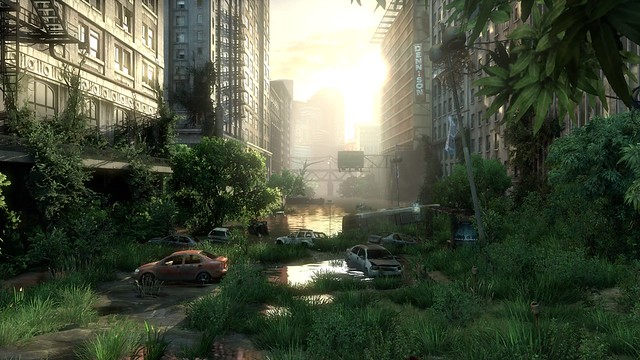 You play as Joel, a rugged survivor who has seen his fair share in life, both before and after the infected breakout that has turned the world he knows upside down. Joel’s life goes from unexpected turn to unexpected turn, surviving the infected and the savage hunters that kill and pillage everyone. When you first control Joel as you venture into the cityscapes, you get a sense that Joel is hardened and well-versed in the environment around him. As you tie some loose ends with Tess, your partner, Joel accepts a job to smuggle a girl name Ellie across state lines. It would seem simple enough except the lengths they go through have him wonder what possessed him to take this job in the first place. The further he ventures out, the harder it is for him to turn back. 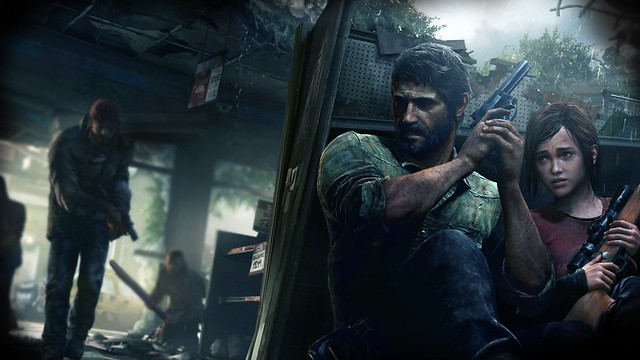 The progression of Joel’s character is real, something so real that you question your reaction in the same situation. Joel is the epitome of a survivor, and one whom adapts instantly to his surroundings. Throw a 14 year old girl in the mix, one who can’t swim, has never used a gun before and overall has no knowledge or experience of what it means to survive, and now you have an idea of how complicated and daunting a task Joel has in front of him.

Joel’s journey with Ellie starts out very bumpy. It makes sense simply because they don’t know each other, but also because Joel doesn’t show any sympathy or compassion. There are some pretty cold moments between the two where Joel holds no punches and shows no signs of caring what happens to her. Ellie on the other hand may be young and inexperienced in the ways of survival, but she has a tongue as sharp as nails and isn’t afraid to use it. 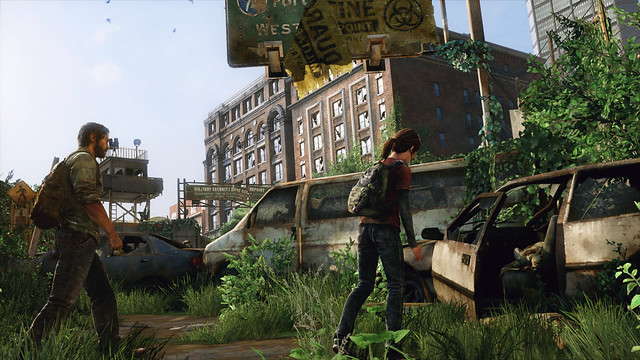 Although Joel and Ellie come from completely different perspectives and walks of life, the terrors that confront them bring them together like nothing before. In fact, one of my favorite experiences with this adventure is the bond between the two, because through the conversations they have as they progress initially, it’s clear that they do not get along. What was even more interesting was that it showed in combat as well. Joel and Ellie would be hiding behind cover while hunters are patrolling the area. Joel is doing all of the work while Ellie hangs back and waits until the coast is clear.

Now, as time progresses, you start to see a relationship form. One where conversations become more lighthearted; one where Joel begins to help Ellie to overcome certain fears; one with enough trust and emotion built in over a period of time that shows the two working in tandem to eliminate a group of hunters or infected alike. It’s really cool to see that teamwork isn’t just there, it gradually becomes incorporated into the storyline and gameplay. The fear of death ultimately brings them together to form this bond that cannot be broken. 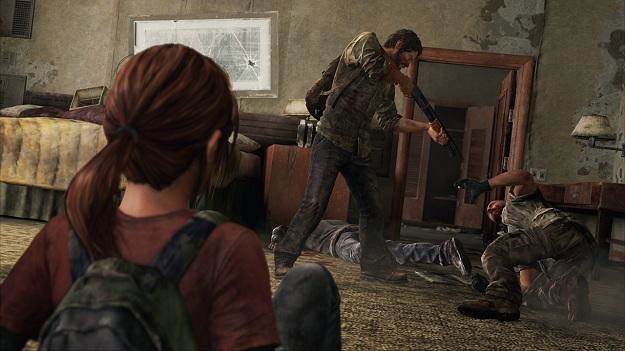 The Last of Us is a very fluid blend of stealth action, platforming, very light puzzles and crafting. Oftentimes you will be at opposing ends of an area with either group of hunters, soldiers or the various infected types. Depending on what you encounter, however, determines a suggestive approach. For instance, dealing with the infected Runners is fairly straight forward once they see you because they do nothing more than close in on you fast and go for the kill. Bigger numbers are more of a concern, especially when ammo is scarce. Infected Clickers are much more of a concern. They are extremely sensitive to sound so sneaking is paramount when engaging them. Make sure to avoid knocking or tripping over objects like bottles as they too draw attention to these walking pop rocks. 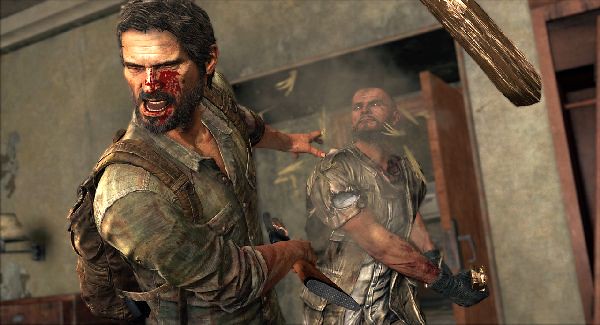 When a lack of inventory becomes a problem (and it will), you can trust in your ability to craft items from your backpack using materials that you pick up along the way. Using your backpack, you can craft upgrades for your melee weapons, medpacks, molotov cocktails, and even handmade grenades. I personally had several moments in my first playthrough where I had no ammo or items to speak of, and had to resort to lefty and righty to get from point A to point B. Not once did I feel screwed going into a new area with nothing other than fists and maybe the occasional brick to help move me along. I always felt on edge but also capable of how to handle my next task. Ammo always seemed to drop at the right time when I felt I truly needed it. This level of scarcity really helped to increase the uneasiness that you endure for the nearly 20 hour adventure. 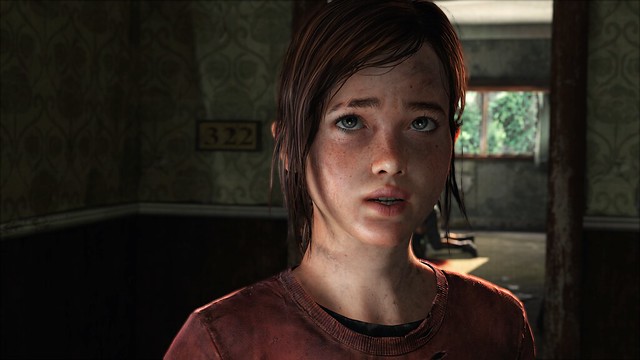 The Last of Us is a masterpiece that has come out at (in my opinion) a perfect time. A time not only where gamers start to see a lack of games coming out during the summer but also at a time where I feel that stories told in games lately have been lacking something critical: emotion. The 20 hours that I spent experiencing this adventure made me feel like I was hiding in the shadows with both Joel and Ellie. I honestly cannot think of a game that made me tear up, laugh, drop my jaw, shudder and jump out of my seat all in one adventure. I felt like I was the camera guy on the journey experiencing all the ups and downs. The Last of Us has so much emotion engraved into it that I wasn’t ready for it to end. Yet, the ending left me with such a satisfying, and conflicting taste in my mouth that I can’t see as anything short of justifiably awesome.

Multiplayer is available as well and is a welcome addition. You pick between representing the Hunters or the Fireflies as you team up with clan members to gather supplies and survive a period of time. The sense of progression is cool here because it gives you that feeling of being a survivor with friends. Level up and gather supplies to upgrade your weapons, items, as well as unlock gear. The more people you work with, the more improved your chances at survival become.

If you like good stories with great depth, amazing character development, and you don’t mind engaging yourself in an emotional roller coaster ride then look no further The only hindrances I experienced were some screen tearing, the occasional glitch, and load times long enough to throw a round of laundry in both the washer and the dryer. This experience will be the oasis you find in the summer heat this year, and I would certainly vote this as Game of the Year worthy, even with the exciting things to come later this year.

Recommendation | If you like good stories with great depth, amazing character development, and you don't mind engaging yourself in an emotional roller coaster ride...look no further.

Tags: Naughty Dog, PS3, review, Sony, The Last of Us