Spirit of the North Enhanced Edition takes cues from other adventure games like Journey, but it doesn’t offer the same level of replayability. However, it does have a super cute fox.

Spirit of the North Enhanced Edition presents a world where humans no longer exist – a place of serene beauty. This is a world where nature can live peacefully, with remnants of a former civilization scattered across sections of the land. Infuse Studio has very clearly taken cues from other titles (Journey), but they’ve given Spirit of the North a bit more of a driving force. This is a peaceful game and one that I likely won’t play through again. Still, I’m happy I got to sit down with this talkative little fox on his journey.

A journey similar to Journey

The fox’s adventure stems from trying to discover the source of a red mist that has taken over part of the sky. Guided by a spirit fox, our protagonist sets off across a pretty decent-sized chunk of land, with no real narrative guiding his way. There is no dialogue. Instead, the game gives players the option to explore the land and learn more of the mythos and Nordic folklore along the way.

Spirit of the North isn’t a very long game, though. I scoured every nook and cranny to try to find collectibles during my playthrough. There are two different kinds: murals and shamans. Murals were probably more interesting, as they gave us a peek into a life past. The shamans are deceased people who need their staff returned to them in order to go to the spirit world. I’m glad I spent the time looking for the shamans too because there’s a chapter later in the game that rewards you for finding them.

The murals mentioned above are really the only hints into the mythos of the world. Those looking to get the most out of their time here will likely want to explore as much as possible. Otherwise, Spirit of the North is only a handful of hours. It’s broken up across seven chapters that flow reasonably well into each other across events. So despite the short length, there are some clear pick-up and put-down points.

The controls undermine the experience

The controls are the real complaint that I have with Spirit of the North. Since all of the game is built around platforming and exploration, I wish the controls had been a bit tighter. Our little fox moves around well, but precision jumps quickly became tedious if I barely clip the side of a ledge. Couple this with the movement abilities that he has and it often turns into a test of patience. When not platforming, the main thing players are tasked with is solving environmental puzzles. Most of them involve matching symbols on rotating stone pillars, but others become more involved when using spirit power.

In order to gain spirit power, you need to find blue flowers and bark at them to become imbued. This energy is transferred to stones that activate other environment areas to access new platforms. They start off very simple, but by the end of the game, you’ll be transferring between multiple stones and backtracking to previous areas as a give and take with this energy.

Rarely, our fox will turn into a spirit form as part of these puzzles, which was sometimes frustrating if I didn’t know I could access certain points with that form. Since there is no dialogue or text, I often had no context with what I was earning, so things sometimes turned into trial and error.

I hadn’t played Spirit of the North when it initially released on PC and PS4, but the PlayStation 5 version looks great. The sprawling Icelandic landscapes are beautifully rendered and very peaceful to run through. Red areas of corruption contrast the brightness of the world really well, even with the giant red ribbon of mist floating high in the sky and becoming more foreboding the closer you get. Things run at a silky smooth 4K 60 frames per second here, which isn’t surprising considering how little demand is placed on the hardware. I’d be surprised if Infuse Studios couldn’t get it running at 120fps in a future patch.

I likely won’t ever play Spirit of the North Enhanced Edition again, unless I’m trying to clean up a few trophies I missed out on. It’s a beautiful game, but it doesn’t offer the same replayability that Journey does. Once you’ve cleaned up collectibles there really isn’t a reason to go back, unless you’re in the mood for more of a zen experience.

Recommendation | Spirit of the North Enhanced Edition is worth playing for those who enjoy platformers and puzzle titles, even with the frustrating controls. 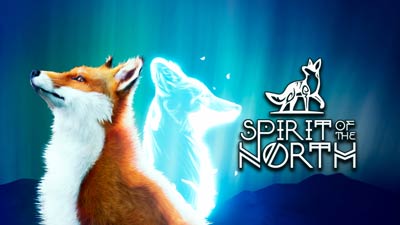