Gameloft is bringing The Oregon Trail to Nintendo Switch and PC.

In The Oregon Trail, players are put at the center of all the trials and tribulations of the journey westward. They must stock their wagon, choose their traveling party, and make sure they all arrive safely in Oregon by making tough choices in dangerous and unexpected situations. Players will also learn the real history behind the trail, including the Native American experience, which is a first in the franchise.

“We’re incredibly excited for even more players to experience The Oregon Trail,” said David MacMinn, Game Manager. “We’re pleased to see our game expand to multiple new platforms, and we hope PC and Nintendo players will enjoy their time on the trail as much as we did making it.”

The November release of The Oregon Trail is a faithful adaptation of the Apple Arcade version. It was created with the support of Gameloft Lviv. It includes all five previous content updates, and the latest new features include more accessibility options, events, and visual filters to see the game in a whole new way!

The Oregon Trail is available digitally on Steam and the Nintendo eShop. The PC and Nintendo Switch versions retail for $29.99. They launch on November 14, 2022.

In addition to the game, the soundtrack is available now as well. Players can listen to The Oregon Trail: Music from the Gameloft Game on Amazon Music and Spotify. Microsoft has announced the latest batch of games coming to Xbox Game Pass. The new titles include UFC 4, Tropico 6, and Bloodroots. But that’s not all! Here are all of the new games that you can look forward to playing soon on Xbox Game Pass: July 8 Dragon Quest Builders 2 (Cloud) Tropico 6… 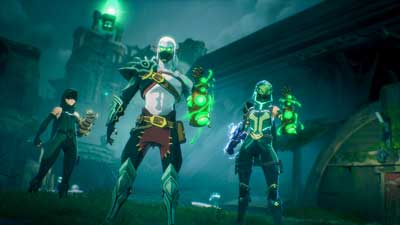 The Elder Scrolls V: Skyrim Anniversary Edition includes 500+ mods from the Creation Club. We can’t deny the popularity of Skyrim and the number of fans the game has gathered over these past ten years. The game has become one of the greatest RPGs in the history of video games. But we can’t bury our… If you’re in the market for a gaming headset and don’t want to break the bank, the Rig 500 Pro HX Gen 2 is a decent option. Rig describes their headset as a “durable, performance headset” that gives players a “competitive edge” due to precise audio. While I am not much of a competitive gamer,… Leslie Nielsen has come to Detroit: Become Human to give it the comedy that no one was asking for but that was sorely needed. If there’s one thing that video games have had since the beginning of content creation, it’s parodies – from the very good to some that are just embarrassing. But, in a…