The psychological thriller Twin Mirror is out now on PC via Steam.

Players can start their adventure in Basswood with a free demo of the game, which is ready to download now from the Steam store page. Game progress and any achievements unlocked are saved and carried over to the game if players choose to purchase it afterward.

Here are more details on the game from Dontnod Entertainment:

Sam Higgs left his hometown, and everyone he knows, behind two years ago. The death of his best friend Nick calls him back to confront the town’s troubled past—and his own. He soon becomes drawn into a dangerous web of intrigue as all is not as it seems in the small town of Basswood, West Virginia.

Forced to face himself and the townsfolk, ex-investigative journalist Sam struggles to balance the scales of reconciliation and his life-changing investigation. He must decide how much he’s willing to risk to uncover the mysteries of his hometown.

Sam has a Mind Palace, an expansive and unique part of his mind where he can revisit his past, relive old memories, and reconstruct events to gather clues and predict the story’s key turning points. His analytical and logical mind can often lead to awkward interactions and unintentional hurt.

This is where Sam’s Double comes in: it is the more social and empathetic side of himself that only he can see. This ally guides Sam through social interactions and helps him navigate a society that sometimes rejects singularity. Through these human qualities, the Double can offer Sam an alternative when he needs to make important decisions.

Every decision, every interaction, and every discovery will influence the direction of Sam’s investigation and will ultimately determine how much of himself he’s willing to sacrifice. There are no right or wrong answers – each player will live a truly unique experience tailored by their very own decisions.

The game is now available on Steam with a two-week 50% launch discount. It was previously released on PS4, Xbox One, and PC via Epic Games Store. 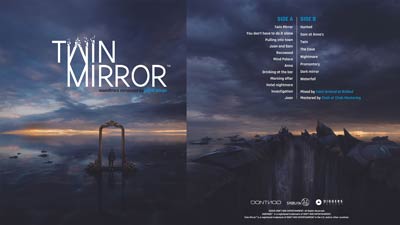 Twin Mirror is getting a limited edition original soundtrack on vinyl Twin Mirror gets a release date