Metro: Last Light is the story of a civilization barely clinging to existence in the Metro, an underground subway system connecting the sprawling metropolitan region of Moscow. Do you have what it takes to survive this radiated wasteland?

As you can imagine, living in the dank confines of a crumbling tunnel is a challenging prospect. The main character, Artyom, recalls a time in his childhood where he and his mother still lived above the surface. While I admittedly have not had the chance to play Metro 2033, the developers promise that the story from the previous game is not required to enjoy Last Light. And you’d be pleased to know that after playing Last Light, I’m definitely going back to play Metro 2033.

Metro: Last Light does a number of unique things that set it apart from the competition. For one, it’s interesting to play from the perspective of a Russian. Moscow comes under attack and retaliates with its own nuclear arsenal. At one point in the game you relive a flashback of an airplane captain flying into the capital when the bombs go off. The EMP disables the electricity on the plane, sending it crashing to the ground. 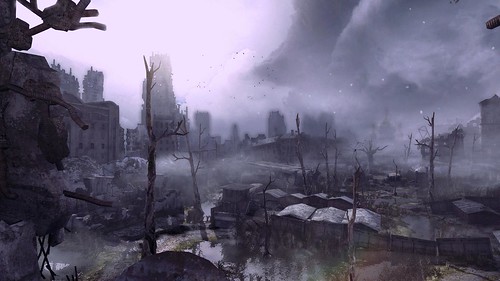 It’s a powerful experience that doesn’t take the subject lightly. Moscow has literally been ruined. Pockets of intense, life-threatening radiation make it uninhabitable even decades after the blast. Weather patterns have been altered and life on the surface comes in the form of badly deformed mutants. You cannot traverse the landscape without a gas mask, and even then, you must change your filter frequently. Metro: Last Light gives you the palpable feeling of what a nuclear hellscape would look like.

Underground isn’t much better. Clans of humans band together to take control different sections of the Metro. If you thought that unimaginable destruction would bring people together in a unifying way, Last Light sees the opposite. Playing as Artyom, you will encounter neo-Nazis known as the Fourth Reich hell-bent on purifying the race, while Marxists plot a war of domination.

Metro: Last Light is a linear experience with plenty of opportunities for exploration. Meticulous players will find notes to thicken the plot, overhear conversations among the denizens of the Metro, and eavesdrop on the enemy. Last Light is not at all a run-and-gun shooter. The developers built this to be a slow game to immerse the player in the world. Patience is a must to get the full experience.

Combat is solid, even though it is strongly discouraged. You can hold up to three weapons at a time, as well as objects such as throwing knives to disable enemies quietly. There are certainly plenty of opportunities to get in a good gun fight, but it is also possible to play the game entirely using stealth techniques where you do not kill any humans needlessly. 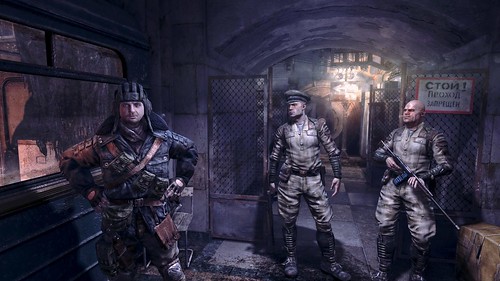 The biggest problem I had with the game are the virtually non-existent A.I. and graphical glitches. The A.I. apparently does not respond to sound with the exception of gunfire. They sometimes do not even attack when you are clearly within their field of vision. Likewise, unscrewing a light bulb to hide in the shadows does not draw any suspicion. They may check the circuit breakers but they take such a predictable route that you can easily disable them without any problem.

The graphical glitches are even less forgivable. The most common one is the hidden wall. Also common are collision detection issues. On a single occasion, I had enemies pop in and out of the screen momentarily. There are also reports on the Internet of enemies not moving at all. It seems like the developers could have delayed the game a few more months to iron out these kinks.

Overall, the developers at 4A Games delivered most of the elements of a successful single-player game: a compelling story, multiple gameplay choices, and the illusion of immersion in your environment. Holding it back from greatness on the level of a comparatively similar FPS like BioShock are some predictable plot choices, stupid A.I. and graphical glitches. Unlike many other shooters out there, though, I actually wanted to see Metro: Last Light through to the end.

Recommendation | Metro: Last Light delivers a successful single-player game with a compelling story, multiple gameplay choices, and the illusion of immersion in your environment.