Five years ago, Ken Levine and his development studio at Irrational Games changed the landscape of a story-driven campaign with the release of BioShock. The game received instant adoration from gamers and left the vast majority foaming at the mouth for more. Two years later, BioShock 2 was delivered by 2K Marin, a sister developer to Irrational, receiving a mixed reception.

Fast forward to March 2013, a month in which several big titles hit shelves with companies competing for every dollar. Many said Tomb Raider or God of War Ascension would take the crown for the release-heavy month. With the release of BioShock Infinite on March 26, the bar by which most story-driven games will be judged was raised infinitely high. 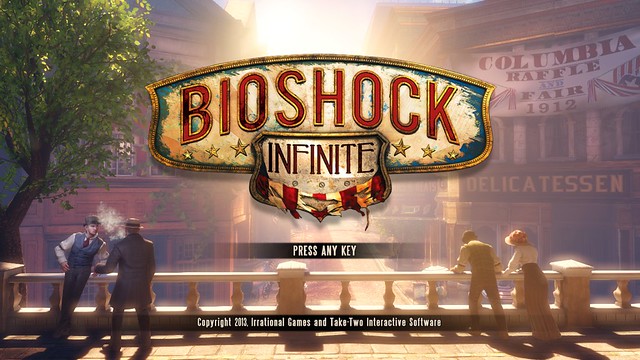 It all begins with a lighthouse. The first five minutes of BioShock Infinite well perplex and intrigue even the most inexperienced gamers. The next thirty minutes or so will leave many jaws ajar at the immense beauty and sheer mind-bending physics that support the city of Columbia. 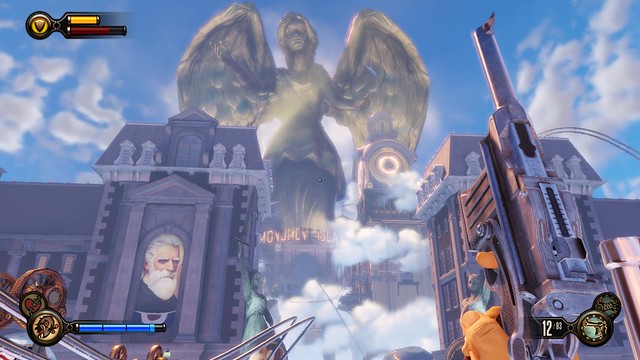 Booker Dewitt, the main protagonist (or antagonist, according to some) is faced with a choice as he wanders the sights and sounds of this awe-inspiring dystopia. From this point on, players are taken on a wild and emotionally riveting journey that will remain etched in their minds for the rest of their lives.

While that description does sound a bit over-the-top to the most sober eyes, such is the world of BioShock Infinite. Your initial experience in Columbia is peaceful. You slowly soak in the racist and religiously radical sentiment of the citizenry before you are revealed to be a heretic. While walking around admiring the floating buildings, a guard will randomly acknowledge Booker’s existence and a hellacious firefight will break out. 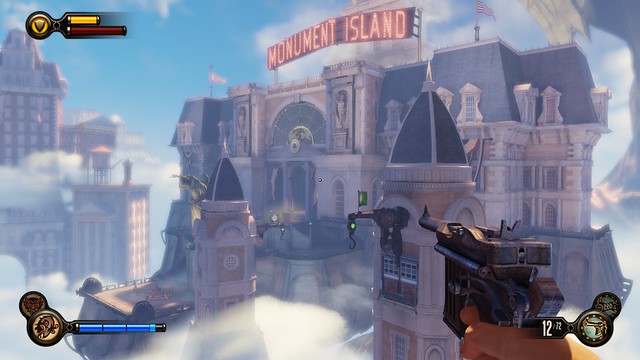 I will admit that at some points, the story starts to lose some of the flow that I expect from a BioShock game, becoming more about the brutal and bloody battles between Booker and his enemies. Luckily, almost as soon as it slips away, the story comes right back around and unleashes a new twist that will keep players enthralled until the next break. While pretty much anything said about the story could be considered a spoiler, I will note that there are some fairly staunch religious and racial undertones throughout the game, but in no way does it detract from the overall experience. It’s more of a commentary on backwards dystopias. 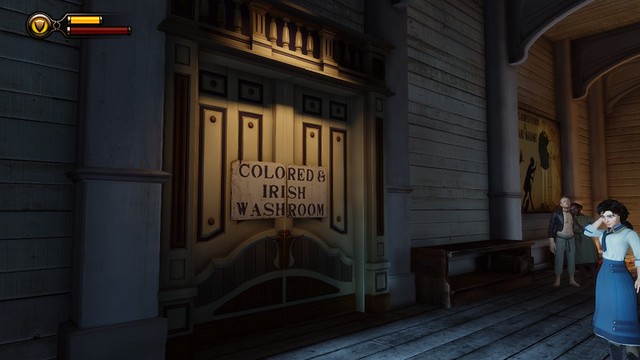 As I’ve already noted, this game is mind-blowingly beautiful. This review is based off of the PC version of the game. I made sure to run it at all different graphical capabilities. Never have I been so impressed with just the art style alone. Where BioShock excelled in overall ambiance and environment, Infinite improved exponentially. The locations can change drastically from a very well lit street to a dark corridor in an eerie building.

One thing I’m glad Irrational Games cleaned up is the combat system. In the original BioShock, the stiff gunplay and plasmid targeting was a bit off-putting to gamers that were used to controls like that of Call of Duty and Halo. Infinite flows much easier between power usage (known as “Vigors” in this title), melee and discharging your weapon. While I do miss the wrench from BioShock, the skyhook makes for a much more satisfying killing tool. 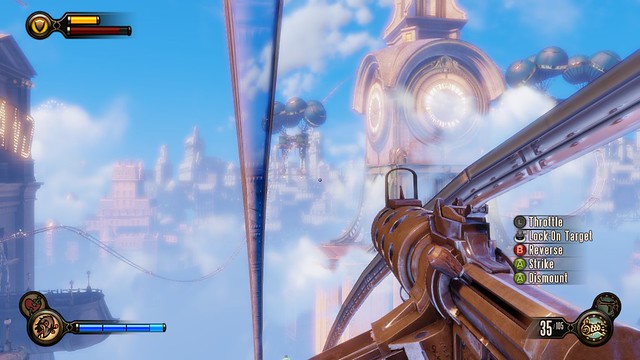 Irrational Games really amped up the violence in this title. Now, you can snap an enemy’s neck or take the head clean off of their shoulders by holding the melee button when they are weak enough. Certain guns and powers can actually make heads explode, which normally I would not mind, but honestly it does not seem like a BioShock game anymore. At times it felt like I was playing a gratuitously violent game like Gears of War or Bulletstorm, rather than a beautifully and eloquently designed first person masterpiece.

All the stops were pulled out when it comes to how this game sounds. When you aren’t looking around every corner due to the eerie and foreboding piano music, you will notice some out of place music. The music gives cues to when enemies are near or when a battle has drawn to a close. It is hard to say anything without blowing a big part of the story, but certain songs will stand out and make you seriously wonder what is actually going on in this ever-changing world. 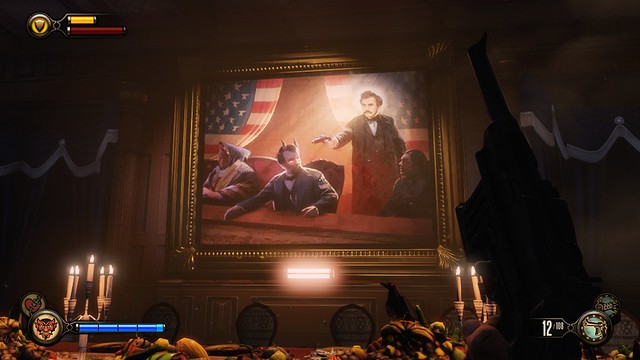 Every gamer has an issue with escort missions, babysitting a non-controlled character and hoping they don’t die. Elizabeth, your partner for the majority of the game, does not incur this problem. She is actually pretty helpful and will not die or even get injured. There were times where I was on the verge of death, and out of nowhere, she would find a medical kit and toss it to me. Her special ability allows you to use aides in the field such as spawning in a turret or some extra cover to assist you in the fight. She adds an interesting dynamic to the series, outside of her ties to the story. Just do not let her see you cutting someone’s head off. She tends not to like that. 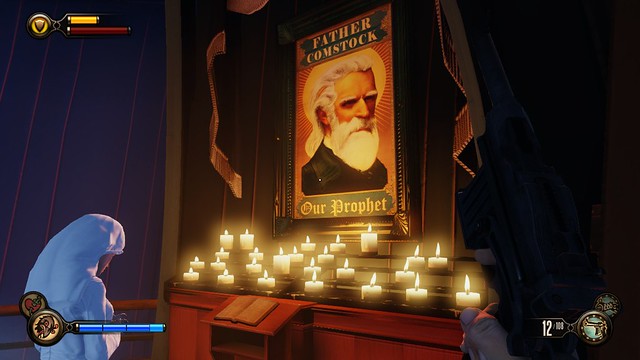 I cannot stress enough how intense the last two hours of this game play out. I live-streamed all of my gameplay, and upon watching the footage, I barely made a sound, aside from the occasional yell as something scared me. It almost feels like sensory overload. Be prepared to catch yourself with your mouth open more than a few times.

I already have my prediction for Game of the Year. Irrational Games has now proven twice that you don’t need to focus on multiplayer to make a great game. The first BioShock had my top spot in terms of story for a game. I’m very happy that the top spot will at least stay in the family, as Infinite has almost effortlessly usurped it.

BioShock Infinite is an absolute buy. Zooming around on the sky-lines is as fun as it looks in the videos. The combat is crisp and the environments are unmatched by any other game out there. I put a good twelve hours into my experience with this title and I would gladly put in another twelve with the much harder “1999 Mode”, which takes the difficulty of the game back to the old school. Irrational already has DLC in the works, which means this game can be played for months, if not years to come. Don’t miss out on this phenomenal title.

Recommendation | BioShock Infinite is an absolute buy. Zooming around on the sky-lines is as fun as it looks in the videos. The combat is crisp and the environments are unmatched by any other game out there.